Scaria, a cute and cozy bistro on the Avenue Parmentier with an open kitchen, gold-topped tables and lots of colorful cushions on the banquettes, goes to a lot of trouble – perhaps too much trouble – to please.

The menu is rather confusingly divided into four sections: végétal (plants), ca mord … à la hameçon (literally, “it bites the hook”; in other words, fish), protéines (meat) and douceurs (desserts).

The owner, who was waiting on us, explained that they had given up on their four-course tasting menu because so many people had food restrictions of one sort or another, making the process too complicated. Now people can choose their own poison (or healthy meal).

He suggested three small plates plus dessert for each person, but we ordered only two savory dishes and one dessert each (I must admit, though, that I was hungry again far before dinnertime, so I probably should have opted for more).

I started with what sounded like – and was – an unusual recipe: button mushrooms, cooked al dente and accompanied by parsley sponge cake, onion flan, pecorino cheese and hazelnuts. You can see from this description what I mean about taking too much trouble. In this case, it was worth it, although the parsley sponge cake didn’t add much except color. 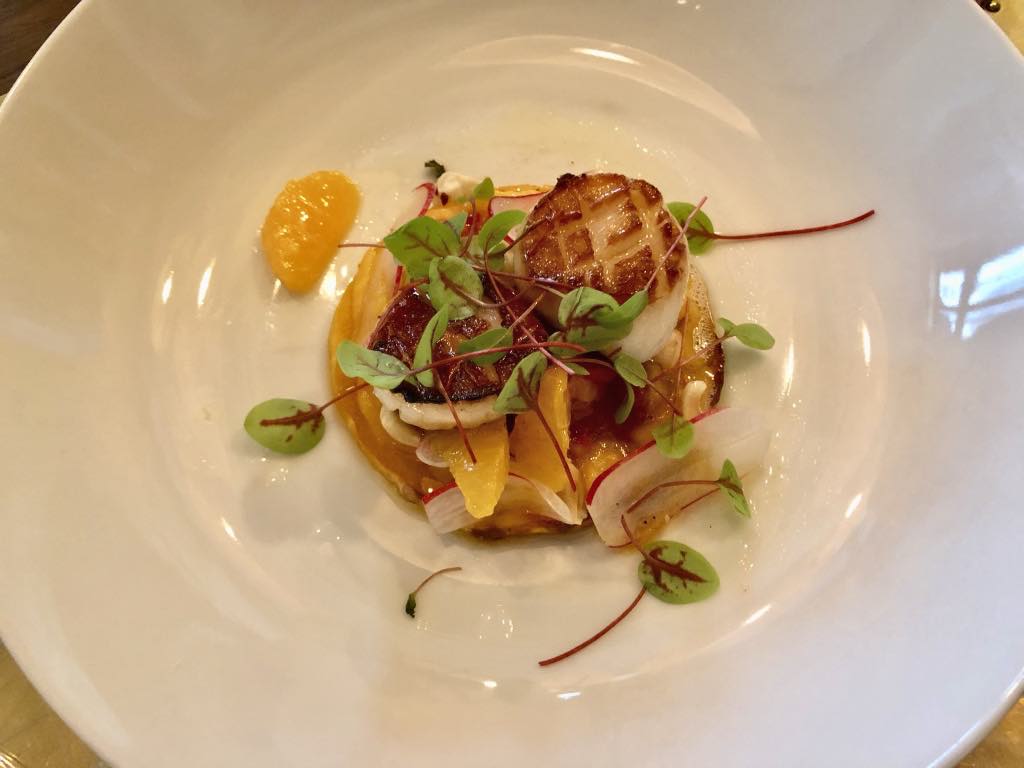 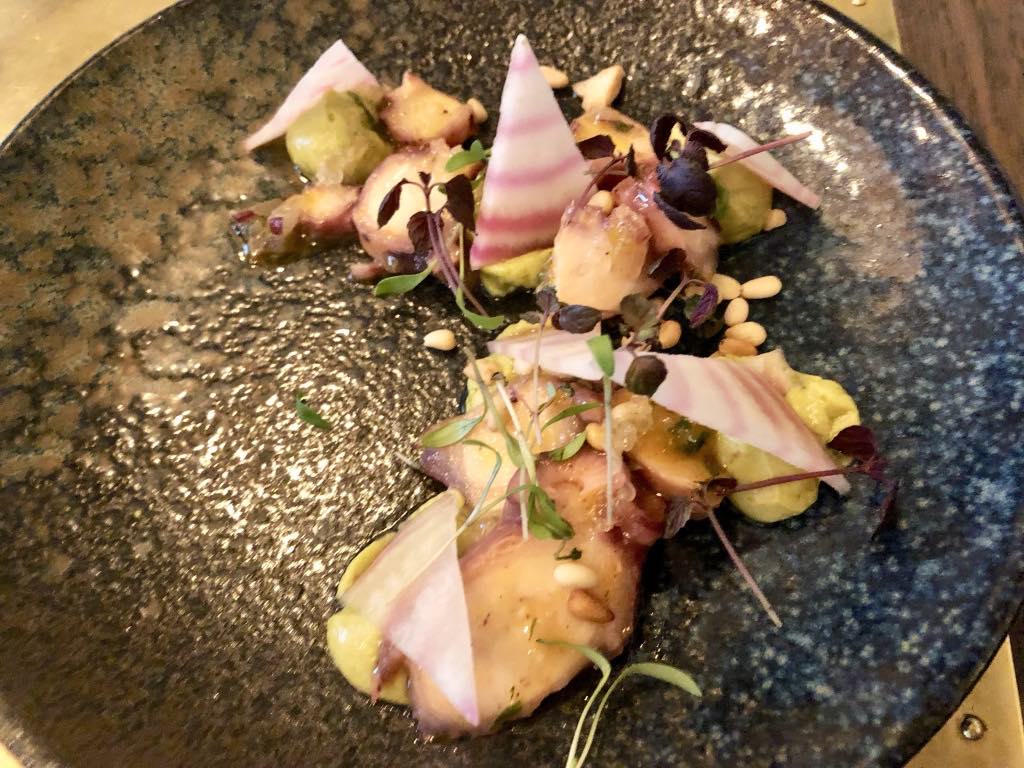 The marinated poulpe (octopus), with its own lengthy list of ingredients, was also a success. It came with Chioggia beets, guacamole, caviar lemon, coriander and pine nuts.

The results were less felicitous in the joue de bœuf (beef jowl), which was served atop a purée of helianthus, a root whose strong flavor competed with that of the beef in a way that created an unpleasant bitterness. The addition of mint and horseradish cream didn’t help much.

The fish of the day, merlu (hake) was pepped up with lots of acidic flavors from its accompaniments: parsnip purée with yuzu, roasted chestnuts, and sauce vierge (olive oil, lemon with chopped tomatoes, basil and red onion). The little roof on top in the picture is a chestnut tuile.

We were ambivalent about the desserts. I thought the “mœulleux de chocolat” (usually a molten chocolate cake, but in this case it was really a ganache) could have been great but suffered from the addition of smoky flavoring.

I liked the rice pudding, made with enormous grains of rice. It was pleasingly light and flavorful, but one of my companions, for whom no other dessert rates higher, pooh-poohed it.

With our meal, we had a wonderful bottle of natural and surprisingly light Sicilian Nero d’Avola bearing the Ciello Rosso label. I noticed that bottles of it were lined up on the grocery shelves near the door, along with a number of fancy products from Sicily. When I asked the owner about the link with Sicily, he said there was none, but that he had seen a study saying that Sicilian products are the top-sellers in Paris’s fine groceries. I found this rather calculating at first, but he looked so sad as he explained how badly his business had been hurt by the long transport strike that I quickly forgot about my reservations. It’s not easy keeping a small restaurant afloat.

I would go back to Scaria, but I hope that the owner will get the chef to simplify the recipes a bit and forget about some of those extraneous ingredients.