Body and Soul: Italian Renaissance Sculpture from Donatello to Michelangelo

“Body and Soul: Italian Renaissance Sculpture from Donatello to Michelangelo,” another major exhibition at the Louvre (along with “Albrecht Altdorfer: Master of the German Renaissance”), looks at developments in Italian sculpture in the late 15th and early 16th century.

The first section, “Grace and Furor,” demonstrates how Renaissance artists looked back to the classical ideal, which inspired both elegant figures and furious movement in their works. To set the stage, the exhibition presents a few Antique works, among them the magnificent “Relief des Sacrifiantes Borghese” (c. 130), with its graceful figures and swirling draperies, displayed next to a relief by the Florentine artist Agostino di Duccio, “St Bridget of Sweden Receiving the Rule of Her Order” (1459; pictured at the top of this page), interesting not only for the obvious influence of Antique models in the swirling draperies and the grace of the figures but also for the way the female saint, who is clasping the hand of Christ, is actually depicted as being larger than he is.

Another Roman relief, “Achilles and Penthesilea” (2nd-3rd century CE) is a wonderful example of “furor”; it shows a raging battle between the Amazon queen Penthesilea, who killed Achilles but was later killed by him when he was brought back to life by Zeus (this war of the sexes, so to speak, was a popular subject on Roman sarcophagi). The Roman relief and the one shown next to it, “Battle” (c. 1475-80), by Bertoldo di Giovanni, both depict an incredible melee of intertwined bodies that creates an all-over sense of pure mayhem.

The show then turns its attention to religious works that use sculpture’s expressive powers to move and persuade viewers. Here the brilliant Donatello led the way. A fine example in this exhibition is a bronze relief with inlaid silver and gilded copper, “Crucifixion” (c. 1450-55), in which the faces of the crowd are contorted with anguish and grief.

Of the many depictions of the Passion on show, one I found especially moving was a marble relief, “Lamentation over the Dead Christ” (c. 1475-90), possibly by Antonio Mantegazza, in which the Virgin, crying out in pain, leans her head forward to touch the forehead of her dead son (the faces look distorted because the sculpture was meant to be seen from below).

Some of the polychrome terracotta works in this section, like the head of a Franciscan monk by Guido Mazzoni, his head thrown back and mouth open, are almost frighteningly realistic, while others look almost kitschy to us today. 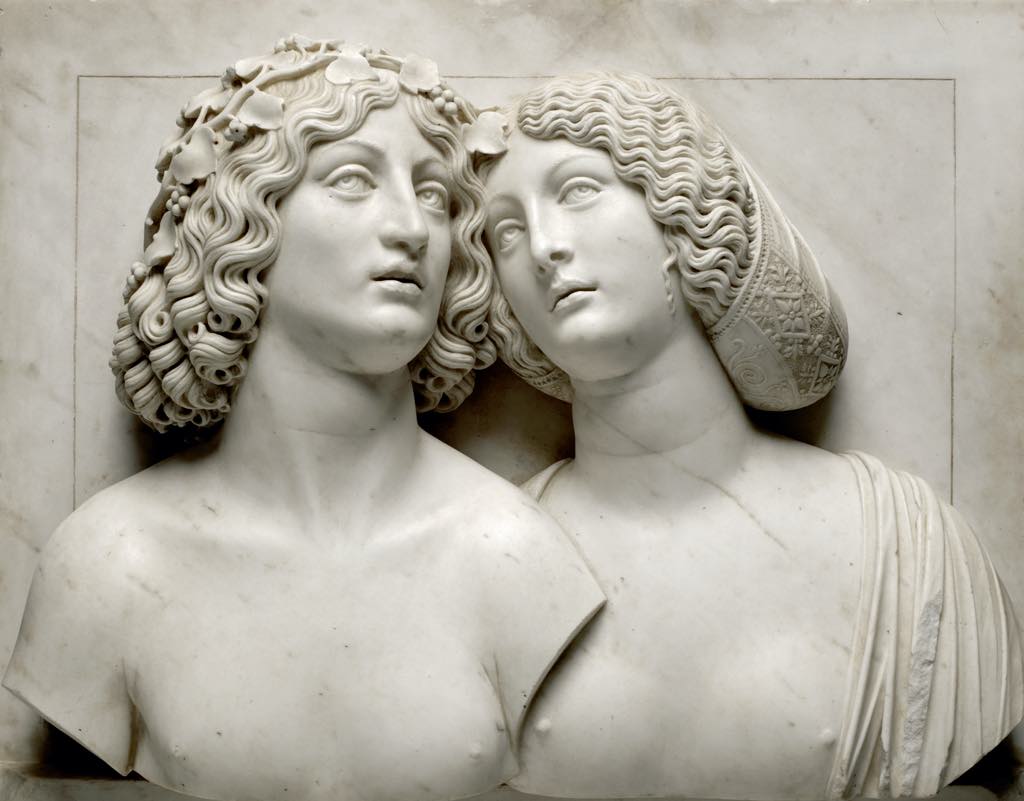 Later, with artists like Perugino and Andrea della Robbia, the emotional dial was turned down, and a simpler, more graceful classical style prevailed, perhaps best exemplified by the sublime sculpture pictured on the exhibition’s poster, Tulio Lombardo’s marble relief, “Bacchus and Ariadne” (c. 1505). Here, the god of wine is no bawdy revealer but a dreamy young man looking off into the distance and tilting his head tenderly toward that of his wife.

This celebration of Italian Renaissance sculpture continues with numerous remarkable works, among them two of Michelangelo’s powerful, expressive “Slaves” (1513-15), one of them dying, the other rebellious. For the curators, “The Dying Slave” sums up the Antiquity-inspired classicism prevalent since the beginning of the 16th century with its “stable figures, harmonious forms and ‘Apollonian’ conception of the male figure,” while the more dynamic figure of “The Rebellious Slave,” struggling against his bonds, “prefigures the linea serpentina that Michelangelo would later develop, fully expressed with the flourishing of Mannerism.”

Let’s hope that the current lockdown will end soon and allow the Louvre to reopen this important show, which continues through January 18, 2021.

Body and Soul: Italian Renaissance Sculpture from Donatello to Michelangelo