The Long Road to Lunch 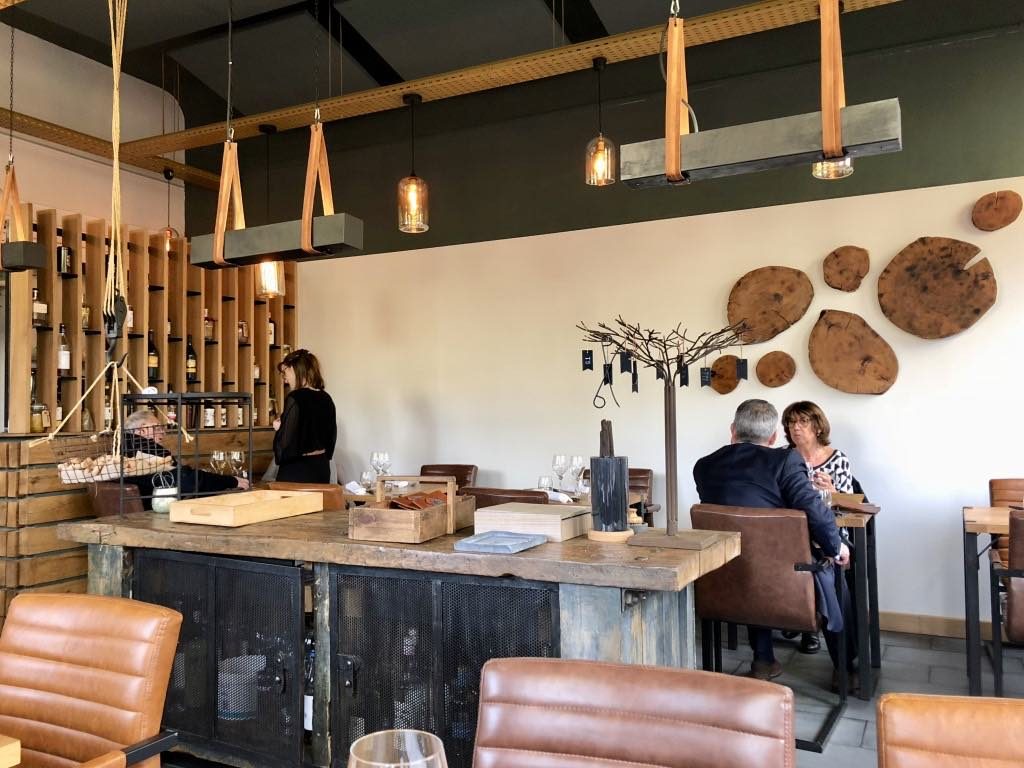 When my food-blogger friend and I hear about a good restaurant, nothing will stop us from going there, even if it’s in another city and we have to take a train for over an hour each way. That’s how we ended up in Lille the other day having lunch at Empreinte.

The place turned out to be in a chic suburb, Lambersart, populated with amazing brick mansions that are pure fantasy, apparently the result of an architectural competition for the most beautiful new home held at the turn of the 19th/20th century. Check out this site to see what some of them look like. Unfortunately, the restaurant was not in one of them, but in an undistinguished building that had been bombed during World War II and rebuilt.

The restaurant’s decor, however, makes up for the building’s lack of architectural interest. It has been cleverly done up by designer Clotilde Fraile with accents of wood, leather and slate. We sat in comfortable leather chairs, and even such accessories as the waitress‘s change purse and the menu covers fit in with the overall look (they were made by leather artisan Mathilde Mas, while the handsome ceramic dishes are by Tristan Philippe). 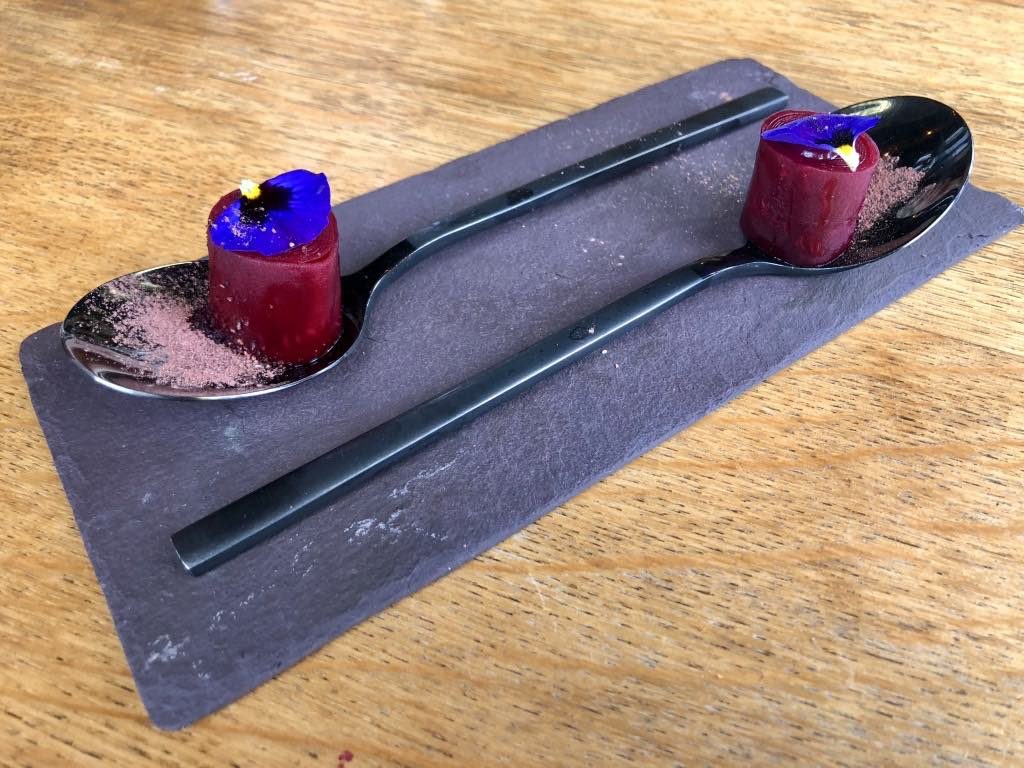 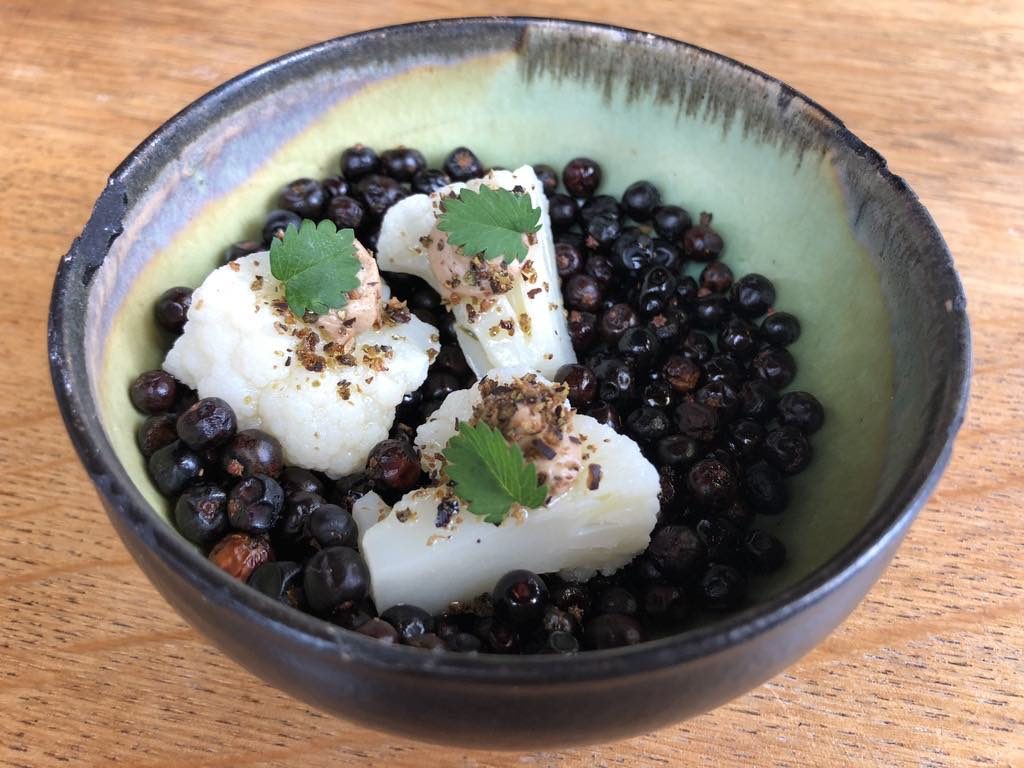 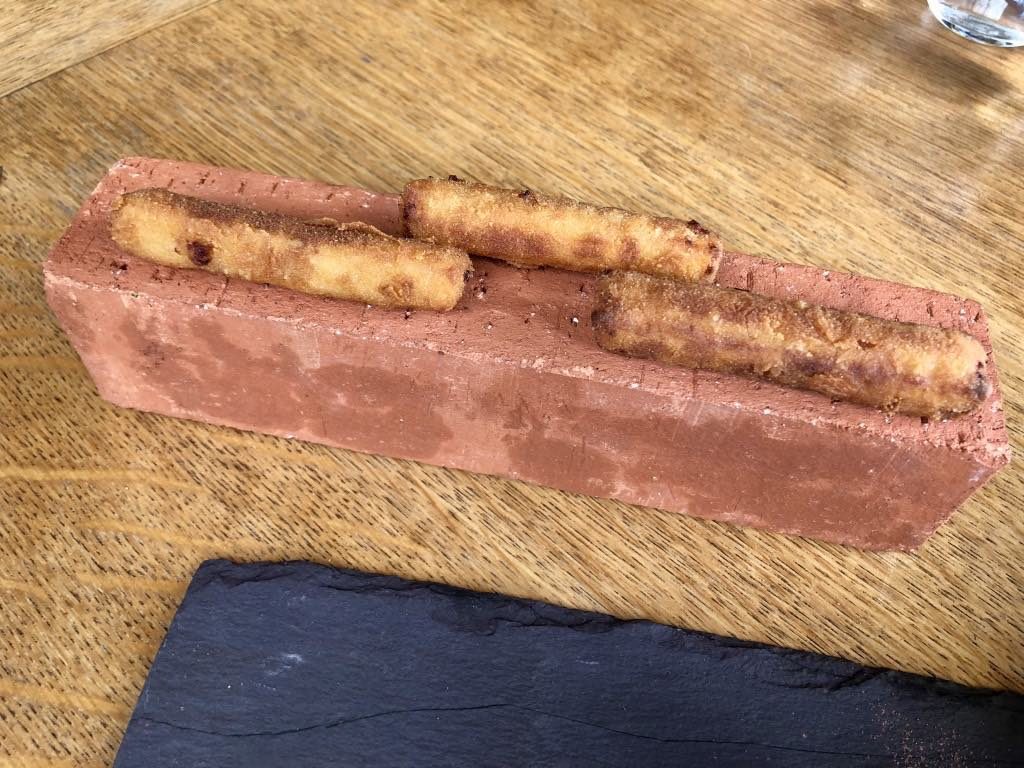 The meal started with three attractively presented amuse-bouches respectively made with beets, cauliflower and cheddar cheese. The cheese logs were the most flavorful of the lot. 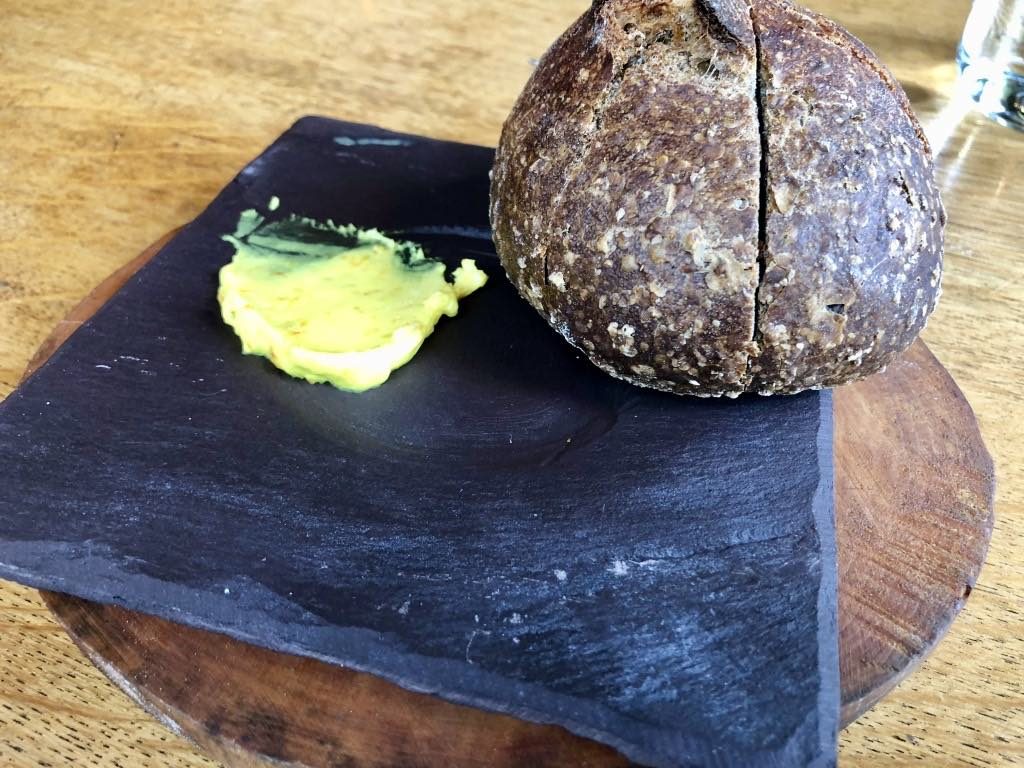 The fabulous two-tone bread, served with orange-zest butter, was from local bakery Pitman.

The lunch menu offers two choices for each course, and all three of us were tempted by the same ones, except for the dessert. 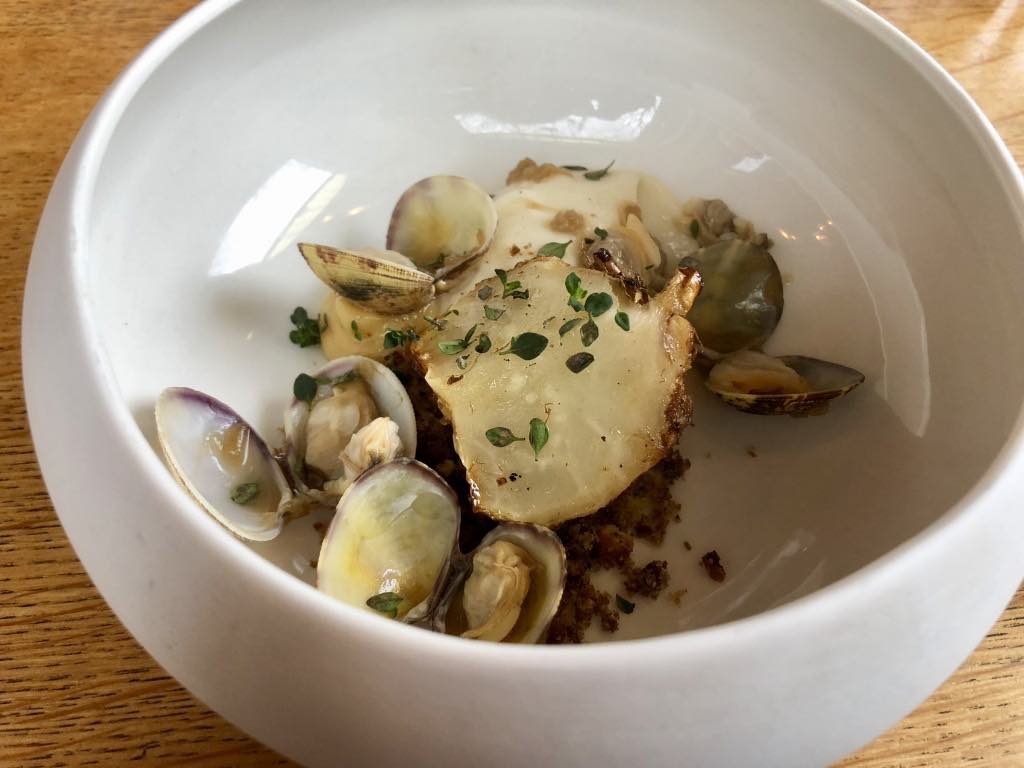 We started with the palourdes (clams), which turned out to be the small bivalves I would call coques (cockles), in a lemony sauce with black cardamom. I liked the sauce but had a hard time enjoying the cockles, which tasted less than perfectly fresh. 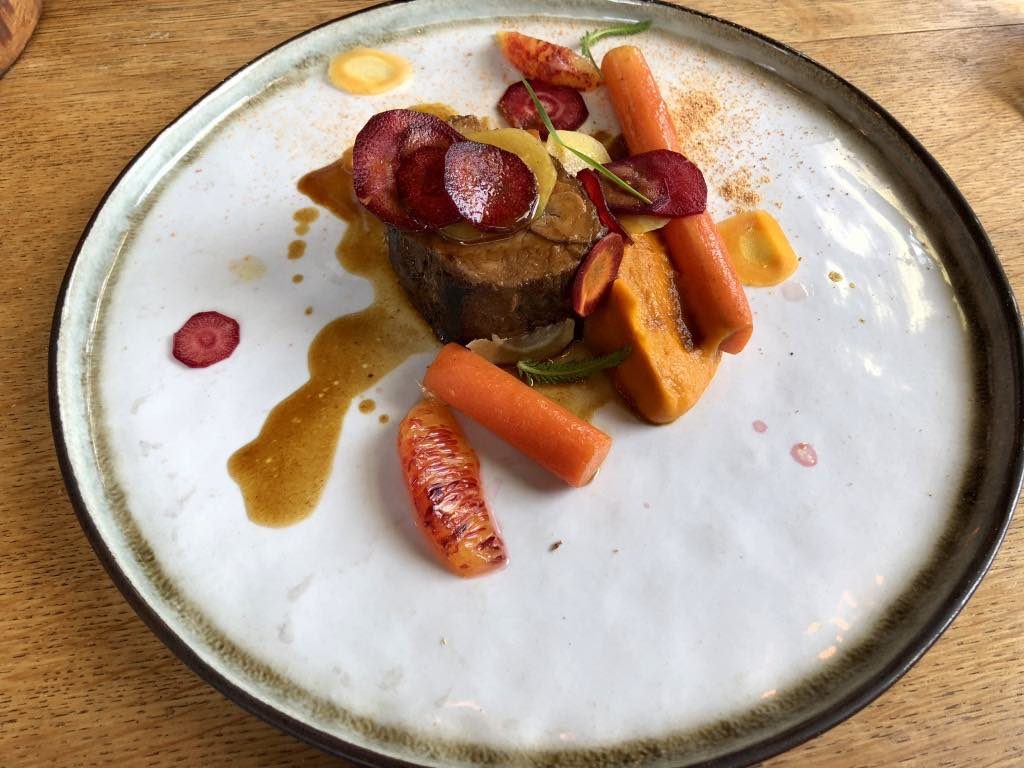 The colorful main course was veal paleron with carrots and grilled orange sections. This cut of veal should be very tender but was a bit dry, and the dish as a whole was fine but not too exciting. 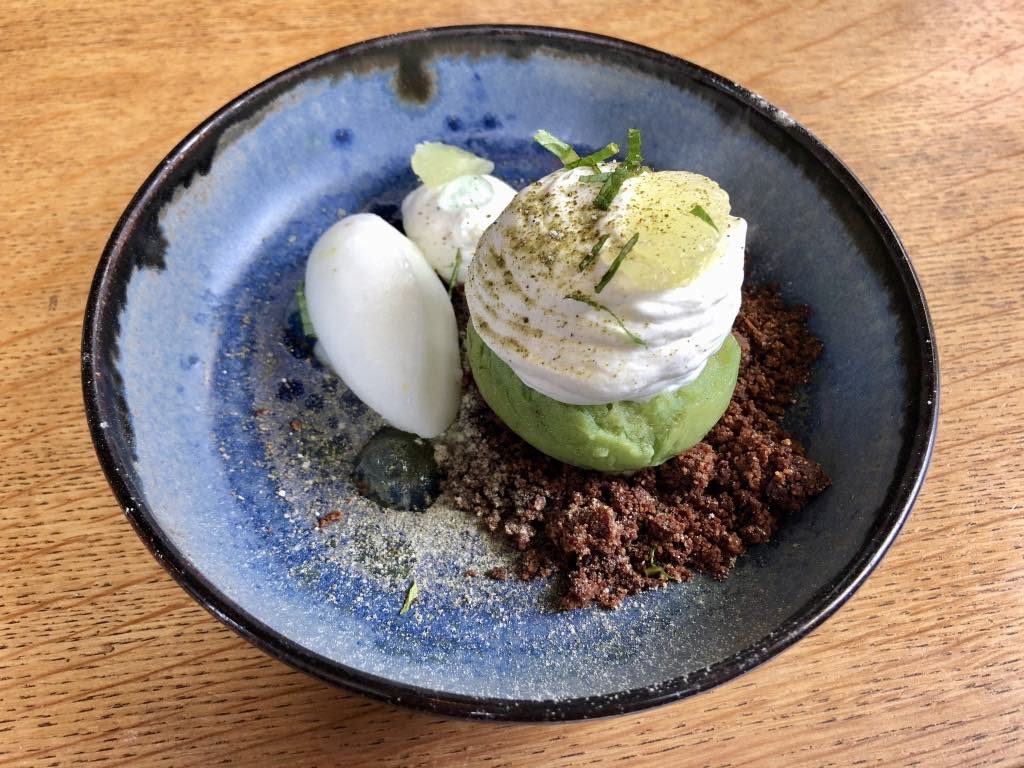 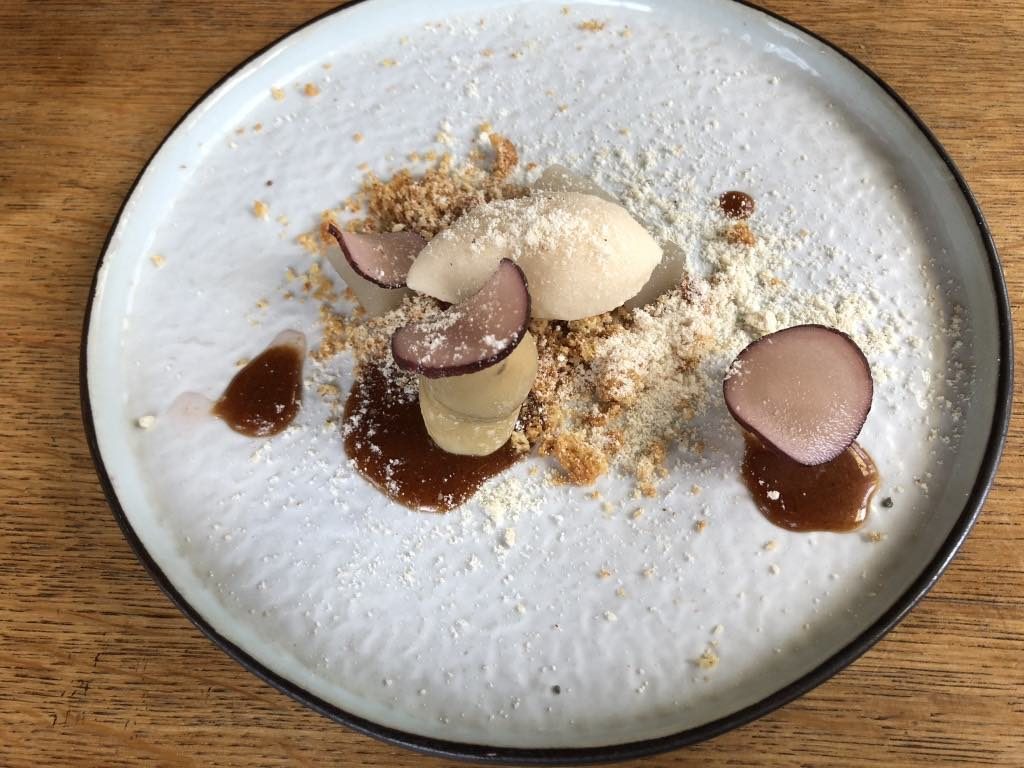 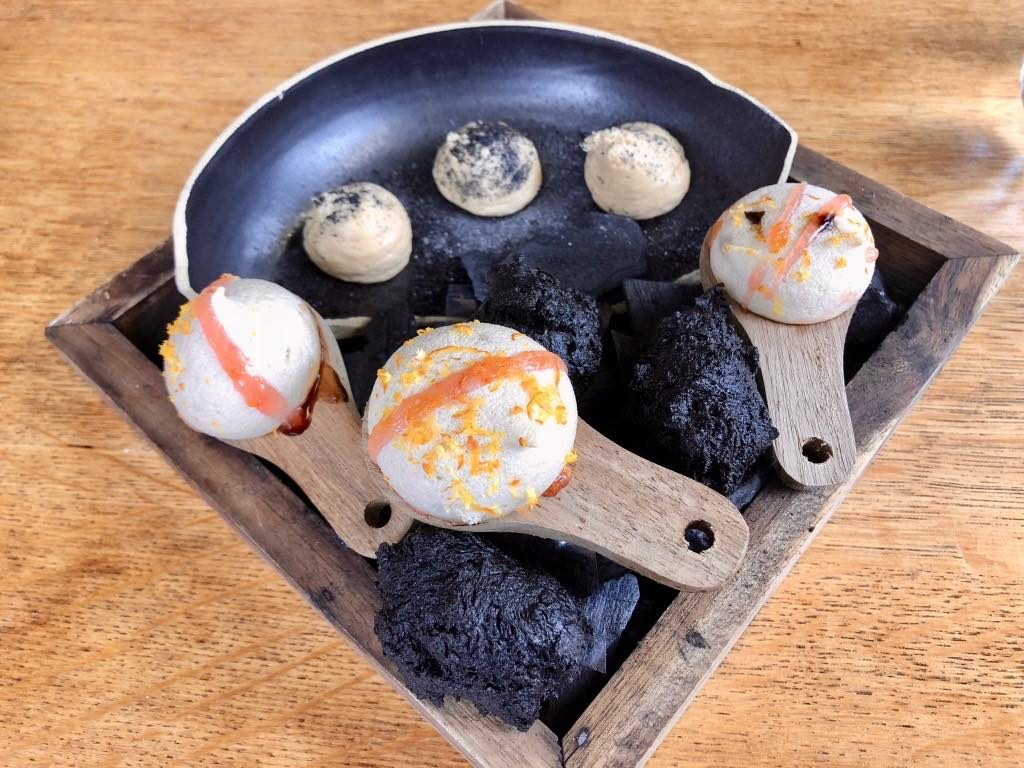 The high point of the meal turned out to be the desserts: a minty/creamy concoction and a riff on pears. Of the mignardises that followed, one was truly creative and interesting: a charcoal beignet with vieille prune ganache.

I wouldn’t make the trip to Lille again just to eat at Empreinte, but I am very glad to have done so and would return to see what else they have to offer if I happened to be in Lille again.