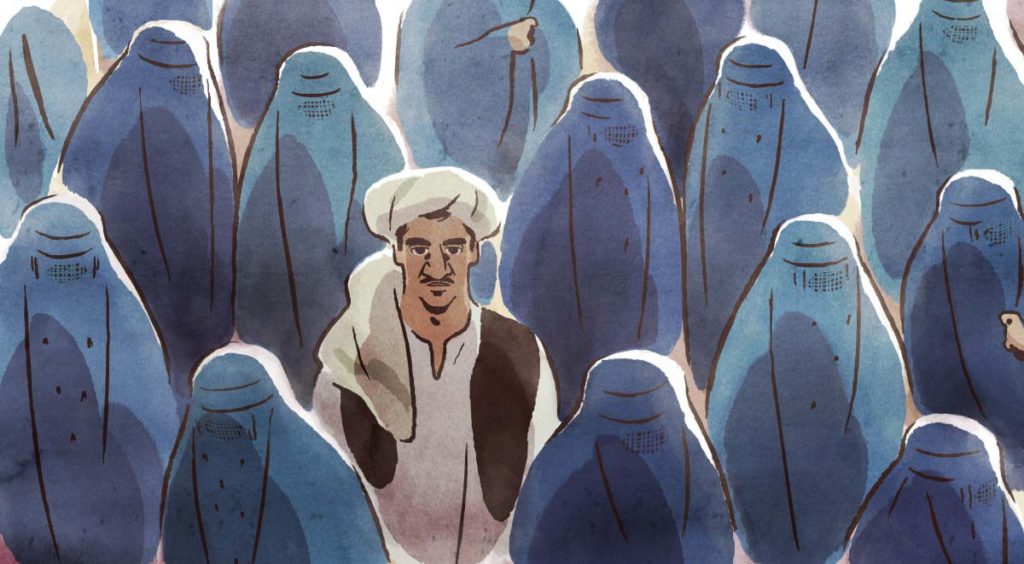 It’s not exactly news that life for women in Afghanistan under the rule of the Taliban was a nightmare, but the animated film Les Hirondelles de Kaboul (The Swallows of Kabul), by Zabou Breitman and Eléa Gobbé-Mévellec, offers a pertinent reminder of the need to resist all authoritarian regimes, especially those that impose their ideology on their citizens, à la The Handmaid’s Tale.

The movie starts with a horrendous event that eventually leads to another one: the stoning to death of a woman accused of adultery. Watching such a barbaric scene would be unbearable if the woman weren’t completely covered by her blue burqa, which at least hides her suffering from us to some extent. The rest of the film offers a glimpse at what is hidden under the identical blue burqas all women are required to wear in public.

Set in 1998, The Swallows of Kabul tells the story of two married couples. One of the men, Atiq (voiced by Simone Abkarian), is a glum, ordinary guy who serves the Taliban by guarding the women’s prison. His wife, Mussarat (Hiam Soualem), is dying of cancer and also dying for a little attention and affection from her husband, who seems to be sleepwalking through life.

The other man, Mohsen (Swann Arlaud) is a young scholar and academic who no longer has anywhere or anyone to teach as the university has been shut down. His wife, Zunaira (Zita Hanrot), is an artist who must hide her free spirit from the powers that be. An optimist, she is the only main character who is not seriously depressed, until she discovers an extremely unsavory fact about her adored husband. From that moment on, there is little hope left for her.

Women are less than nothing in this world and can be tossed away like litter. Atiq, for example, is advised to repudiate his dying wife. “But she once saved my life,” he protests. “So what! She’s just a woman,” his colleague answers.

I won’t spoil the film by saying what happens, but suffice it to say that it’s not pretty, although there is a poignant twist at the end that doesn’t quite inspire hope, but shows that resistance, however tiny, is possible.

The Swallows of Kabul, based on the novel of the same name by Yasmina Khadra, did not horrify or move me as much as the 2015 Timbuktu, a film in which Sharia law also holds sway, perhaps because animation, for me anyway, creates a kind of veil that takes away from the reality of the story. The friend I saw Les Hirondelles with, however, thought that this story was best told in animated form. Was the horror diluted because of the animation or because we have become inured to it?