Love Locks in Paris: The Fake Tradition From Hell

Will This Inanity Ever End? (Scientific Conclusion: No)

It’s being hailed as a major breakthrough. A team of French researchers, now considered shoo-ins for next year’s Nobel Prize in Physics, have discovered the only force in the universe more powerful than the inescapable gravity of a black hole: the urge among tourists to put “love locks” on the Pont des Arts.

Their conclusion is based on the following observations (with links to their scientific source material):

In about 2010, it became a fad for couples to put a padlock on the wire mesh railings of the Pont des Arts, a footbridge across the Seine in central Paris, as a symbol of their undying love, which supposedly would last as long as the lock. Or at least long enough for a night of post-padlock-celebration sex.

By 2012, the structure was burdened with thousands of locks and groaning under their weight. Parisians were also groaning every time they saw the formerly beautiful bridge.

In 2015, with the bridge, and the local population’s patience, on the verge of collapse, the city finally removed the locks and replaced the railings with solid, clear-plastic, padlock-proof panels.

So the problem was solved! Except for one little thing: it wasn’t. Pheromone-dazed tourists, arrogantly ignoring the fact that the bridge was obviously designed to prevent the placement of padlocks, started snapping them onto the hinges behind the panels. A few weeks later, the hinges were covered with metal casings.

So that put an end to the practice once and for all! By which I mean “never and for none”: after that, the lovebirdbrains started climbing up the lamp poles and out over the safety barriers, risking serious injury or death by drowning to put locks anywhere on or near the bridge that can accommodate a little U-shaped piece of metal: 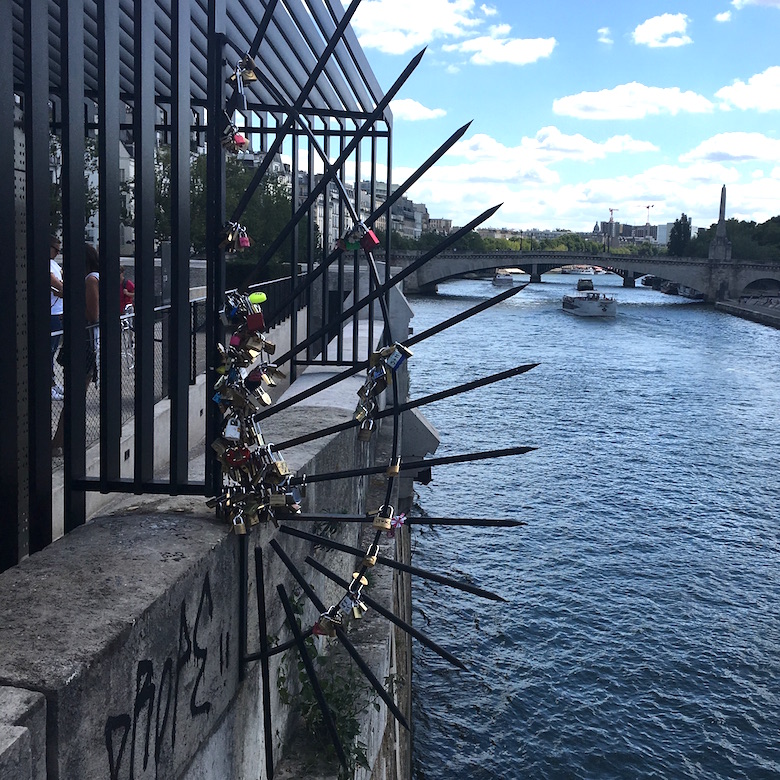 The more resourceful vandals made chains of locks hanging from the lamps: 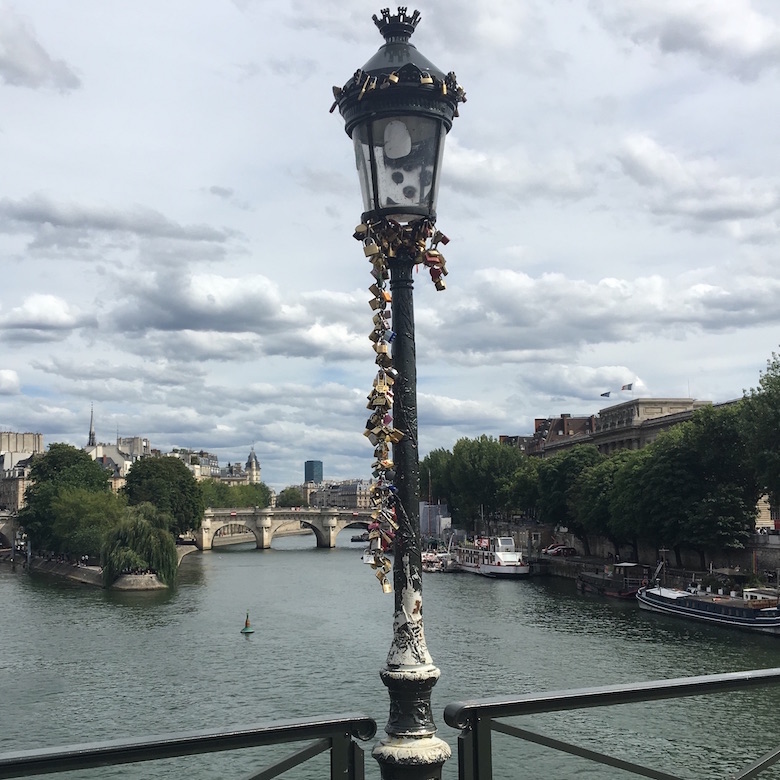 But even that was not enough to stanch the hemorrhage of hormones: then the side panels became a graffiti gallery, as tourists, frustrated that they couldn’t deface someone else’s once-lovely infrastructure with something heavy, solid and difficult to remove, started scrawling their emotional flotsam on the Plexiglas with ink markers:

Apparently the thinking here is, “I have a God-given right to mutilate this bridge in any way that I can!” As though it’s the architects’ fault for not making the panels ink-proof. And, I suppose, scratch-proof, superglue-proof and blowtorch-proof.

News flash! Just as I was about to post this article I received word that yet another French research team has announced an important discovery. A group of biologists at the University of Paris was studying the evolutionary resilience of cockroaches, seeking to demonstrate why these particular insects have been able to thrive on Earth over millions of years.

It has long been known that cockroaches lived through the mass extinction that exterminated the dinosaurs, and they are expected to survive any of the possible future catastrophes (climate change, asteroid impact, supervolcano eruption, etc.) that could wipe out all human life.

As part of the study, the scientists equipped a test group of 10,000 cockroaches with nano-monitors to track their movements and activity and released them at various sites around the city. When the data started coming in, it showed that every time two cockroaches remained for a prolonged period in close proximity, indicating a mating phase, immediately afterward they would gather up bits of some kind of material and migrate, impelled by a blind but powerful instinct, toward the Pont des Arts.

I would like to thank the association No Love Locks for helping me obtain images for this article. And for drawing attention to the damage caused by this pernicious fad.