The spectacular Jardin d’Albert-Khan, just outside Paris, is offering free entry to its six theme gardens Tuesday-Sunday through July 14 only. Online reservations required. 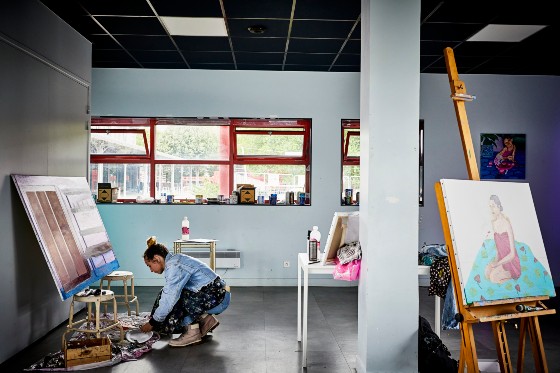 For Plaine d’Artistes, La Villette gives over all of its indoor and outdoor spaces to artists of all kinds, for the public to watch and participate in their artistic processes. Free entry. Above: an artist at work © Christophe Raynaud de Lage.

The all-blue art collection and other belongings of Paris nightlife legend Michou are being exhibited prior to their auction on July 10.

To celebrate the reopening of the Forum des Images, classic short films by directors including Renoir will be screened, followed by the presentation of the Forum’s summer program.

The Wallonie-Bruxelles Cultural Centre presents Festival (((Interférences))), exploring the relations between a range of contemporary sound art forms, from podcasts to radiophonic fictions.

Drive-ins are out – this Saturday, Paris Plages presents Le Cinéma sur l’Eau. Spectators can watch Gilles Lellouche’s 2018 film Le Grand Bain from the comfort of a boat on the Seine. Reserve online to avoid missing out. Deck chairs are also available.