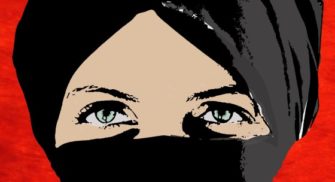 Art on the theme of the veil by 100 women artists is celebrated at Beyond the Veil. Above: Art by Israeli artist Tami Barlev will be shown at the exhibition.

Enjoy Paris design week with art by designers including Quentin Deronzier, live music and a bar at Campari’s Red Galleria.

Literature of the future

Festival Extra! will celebrate the new forms literature is taking in the digital world.

Every visitor to any one of the ten La Fabrique cookie stores will get a free cookie.

Lost in Frenchlation presents Yves (All About Yves), directed by Benoit Forgeard.