Great on the Plate, Hard on the Wallet

Note: Baieta was awarded a star in the 2019 Michelin Guide.

The restaurant Baieta, owned by young chef Julia Sedefdjian, formerly of Les Fables de la Fontaine, has already been discovered by many American visitors, judging by the number of my compatriots eating there recently. It turned out that these are Americans with good taste indeed, but they must also have fat wallets.

We tried a number of dishes that day, and almost every one was delicious. While we waited for our meals, we were offered tasty bites of pissaladière and a less-enjoyable onion broth with thyme, bland with a slightly soapy taste. That was the only false note food-wise.

One of my favorite dishes was the crispy egg yolk. I couldn’t imagine what it would be when I ordered it, but it turned out to be just that: a runny yolk contained within a crunchy ball. Don’t ask me how they do it. It came with bits of haddock and leeks in vinaigrette. 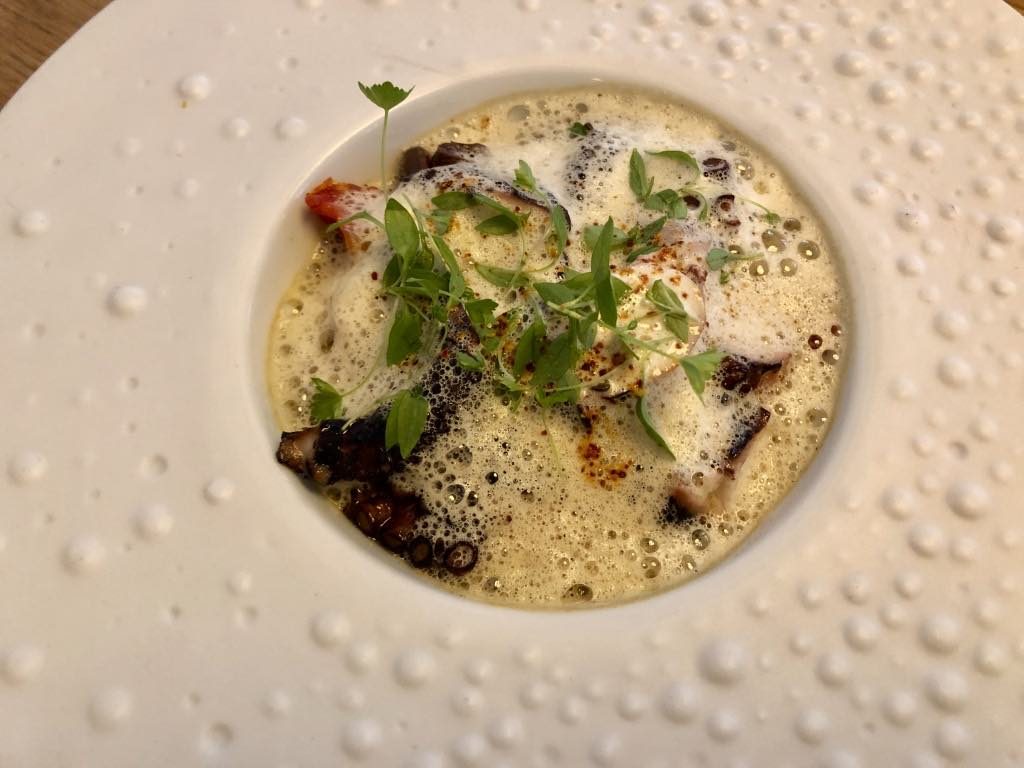 The other starter was a soupy dish of confit octopus with potato gnocchi in crabmeat broth.

The fish theme continued with the main courses. One was a deconstructed bouillabaisse with rouille and toast on the side. It was tasty, but I would go for the traditional version of the famous Provençal fish soup any day.

The line-caught lieu jaune (pollock) came with a medley of seasonal vegetables, a quail egg and wonderful crispy mussels (they are very good at crispy here).

Our three creative desserts were all interesting in their own way. One was a cake with coconut cream, roasted pineapple, and mango- and passion-fruit sorbet.

The second was a fennel-flavored financier with lemon-flavored whipped cream, and lemon and pastis ice cream.

The last was a pear “lacquered” with cider, with a walnut cookie, chestnut cream and apple sorbet.

I thought the food at Baieta, with the exception of the unfortunate broth, was terrific, but one of my companions was unimpressed by the main courses and desserts.

The real problem came when we received the bill. We had all thought we were ordering the two-course €29 lunch menu, so were a bit shocked by the total. When I asked the waitress why it was so high, she said it was because we had ordered à la carte, and that there were no choices on the special menu. “We always explain that when you order.”  Well, no one had explained anything to us, but to be fair, I think we had misunderstood the menu, which was not very clear, and she did reduce the total from €282 to €244 (including wine and coffee). Still, at these prices, I don’t think I will be going back soon. Too bad.