Basquing on the Terrace of a Summer Evening

Summery weather and an evening reading at Shakespeare & Co (Zadie Smith and Nick Laird), could lead to only one conclusion: dinner at one of Paris’s top terraces, the nearby Beaurepaire. A meal there was also an occasion to check on the evolution of a restaurant first reviewed here in 2012.

The large, tree-shaded terrace was as lovely as ever, with almost no automobile traffic passing on the narrow streets surrounding it. The first surprise on this particular evening was that almost all the tables were occupied by French people, not tourists as they had been on my last visit there. Luckily, since we had not reserved, there were still a few tables left.

The second surprise, on opening the menu, was the discovery that nearly all the dishes, rather than just a few as before, were Basque. Apparently the owners, one of whom is Basque, have not changed, but the focus of the menu has. 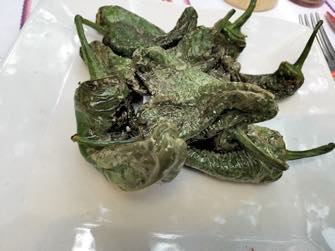 My friend Steve, an aficionado of Basque food, was immediately attracted by the Padrón peppers and the Galician sardines, so we ordered both as shared starters. The former were perfection, served piping hot, cooked to a turn and sprinkled with gros sel. Steve was shocked to see the sardines served in their can, but I explained that this is a trend in Paris restaurants (a rather lazy one, since it requires absolutely no effort from the chef), but he had to admit that they were excellent. They were served with toast, especially fine sweet butter and tasty, perfectly salted potatoes. We might have stopped there, so satisfying were these starters, but the main courses were still to come. I had a big, tender hunk of Kintoa pork from Basque country served with thinly sliced carrots and chanterelle mushrooms in a meaty sauce. Steve took a lighter route with the chiperons (baby squid), cooked just right a la plancha and served with a big bowl of rice. I ordered dessert – two types of gateau Basque, one with almond-flavored crème patissière and the other with black cherries – having forgotten that I was severely disappointed by the dessert the last time I ate at Beaurepaire. I would like to say that the desserts had improved, but those were the worst examples of Basque cake I have ever tasted. Perhaps they were just stale, but that’s no excuse. After taking a few bites to confirm my initial negative reaction, I gave up and left the rest on the plate.

It wasn’t surprising that the service was slow, given how crowded the terrace was, but we liked our affable waiter and were entertained by the antics of a large extended French family celebrating a wedding anniversary of an older couple.

As on our last visit to Beaurepaire, the few minor drawbacks were far outweighed by the mostly good, well-sourced seasonal food; the friendly service; and, of course, that terrific terrace.