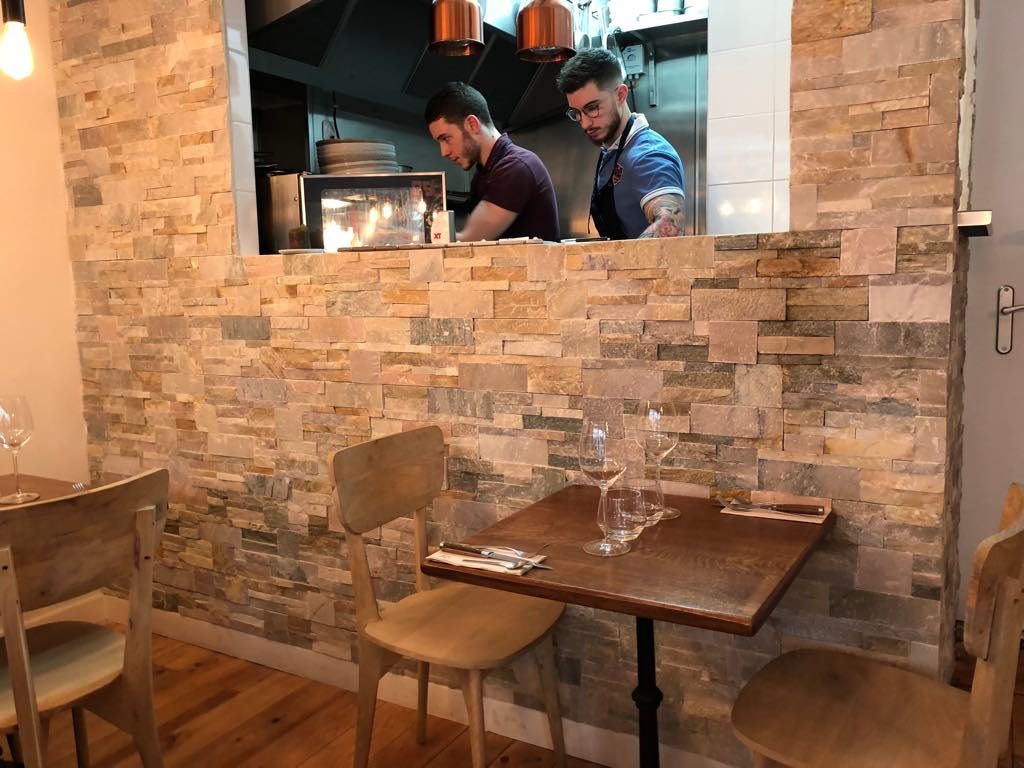 Lately, everyone has been asking me when I will be reviewing Paris’s new nudist restaurant, O’Naturel. The answer is never. I prefer to remain dressed while eating (though I am tempted by nude bowling, which is also possible in Paris). But the other day, I did go au naturel, so to speak, by eating at the bistro Brute in the eighth arrondissement, whose name means “in its natural state” in French.

Perhaps it is so-named because of its pleasingly casual decor – a pale-brick-enclosed open kitchen, blond-wood tables and chairs, parquet floor and an interesting “painting” composed of rough-hewn pieces of wood – or because of the carefully sourced, “natural” ingredients in the food. 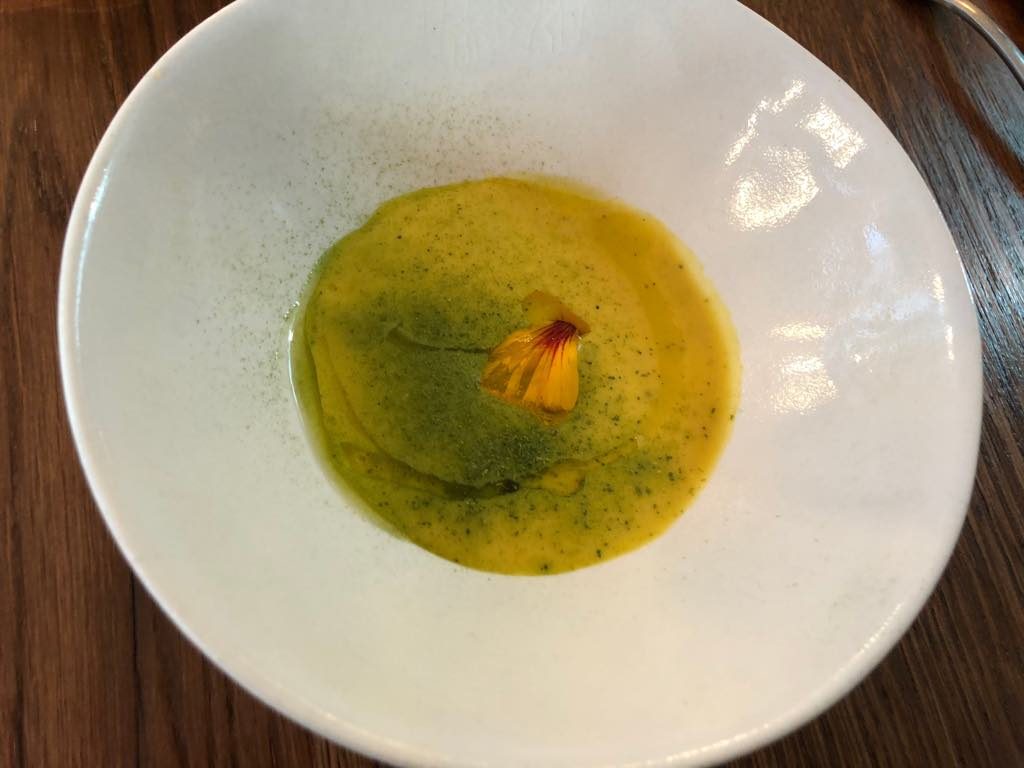 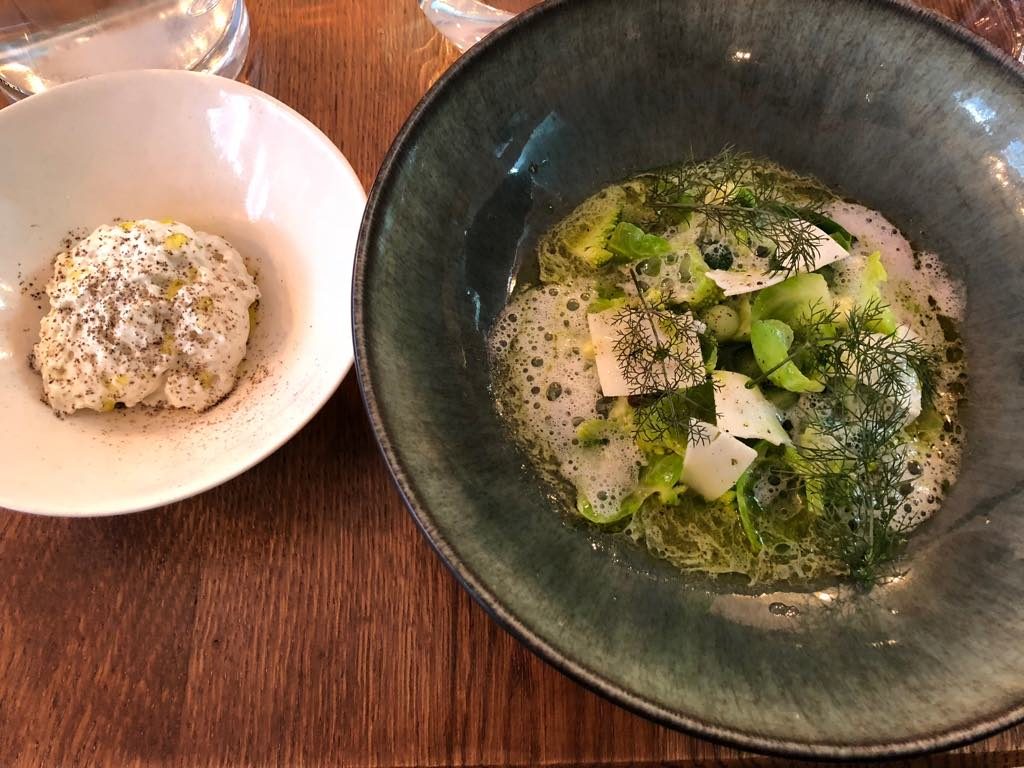 The meal started most promisingly with an unusual amuse-bouche: butternut soup with prunes flavored with eucalyptus powder. This lovely dish was followed by an equally beautiful starter: salad of romanesco broccoli drowned in “cucumber water” spiked with pickled coriander seeds and served with a side of fresh goat’s cheese. My friend thought this was bland, but I found it rather subtle. 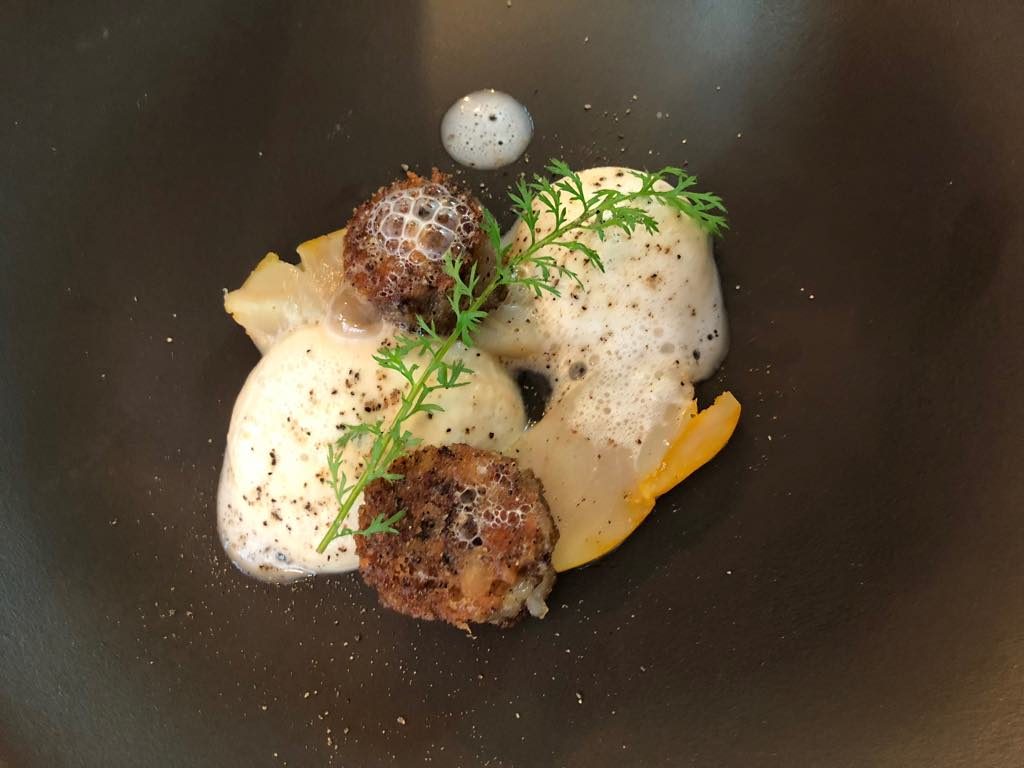 His starter was anything but bland: a combination of pork sausage, haddock and cabbage (scallops were supposed to be part of the act, but the owner explained that he hadn’t purchased them because they were not up to snuff that day; they weren’t missed). The spicy sausage mingled well with the haddock and was terribly tasty in itself. 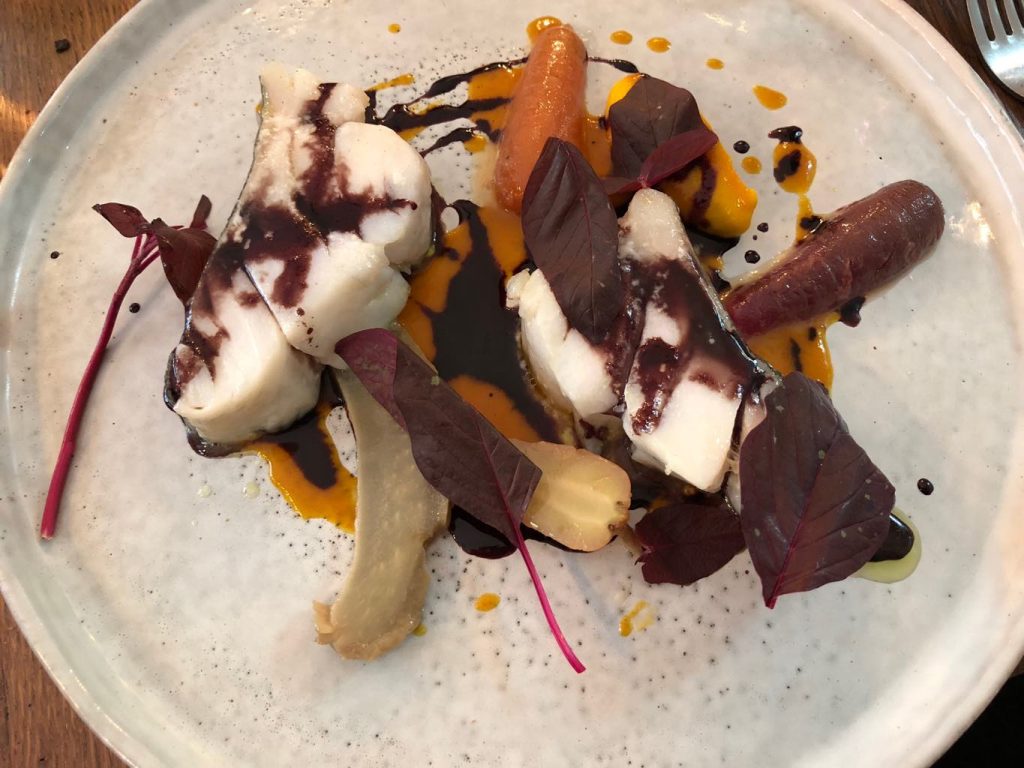 After these intriguing starters, we were disappointed by the main courses. They were not bad at all, but my fish of the day, cod, was just too insipid in spite of a sauce that tasted mildly of soy. It was served with topnotch vegetables: artichokes, red cabbage and carrots. 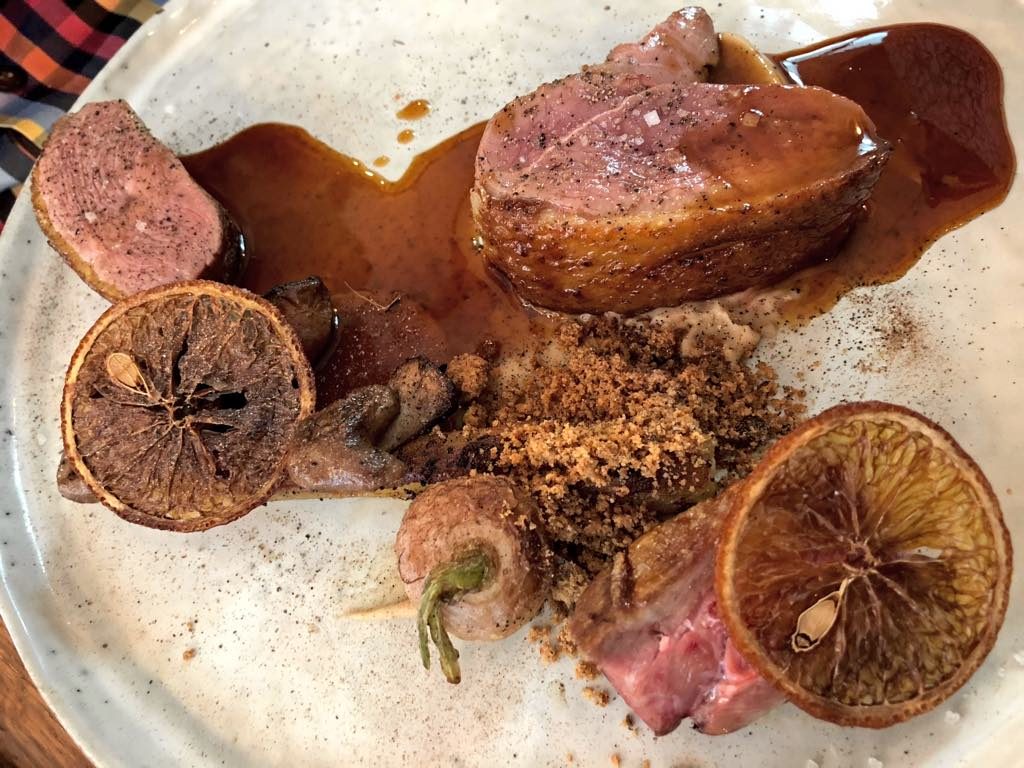 My friend thought that his main-course duck was tough. I didn’t agree – the pieces I tasted were fine – but this was another unexciting dish, even though it came with such interesting accompaniments as salsify, mushrooms, orange slices, cardamom and even crumbled speculoos cookies. Somehow it just didn’t lift off. 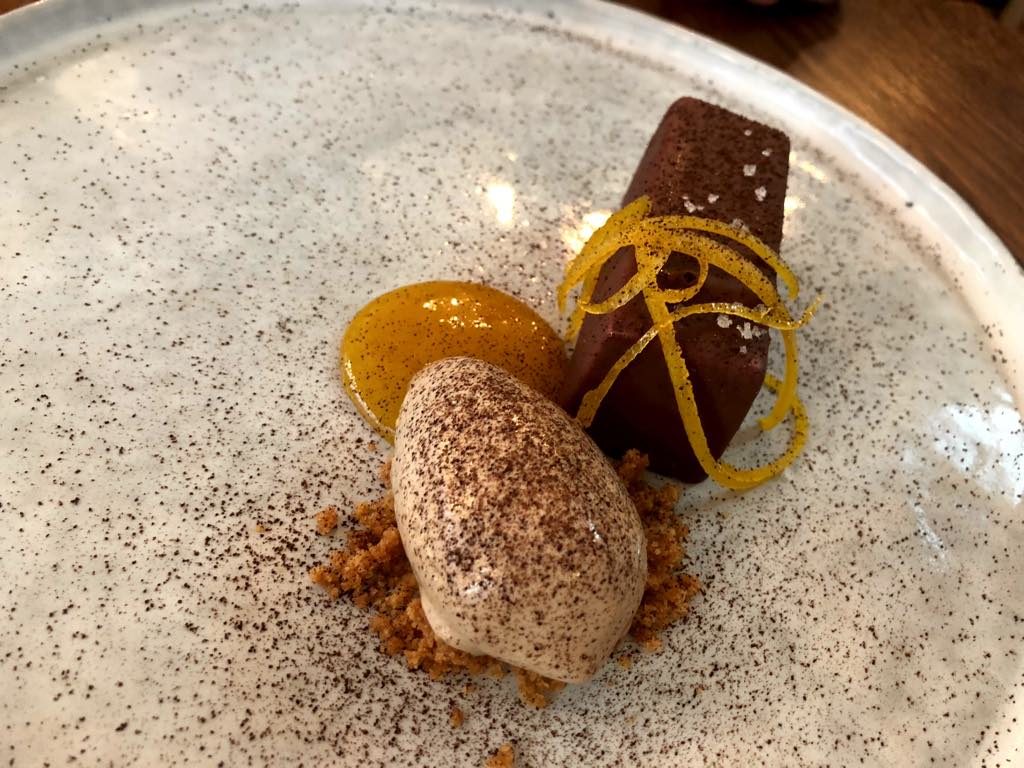 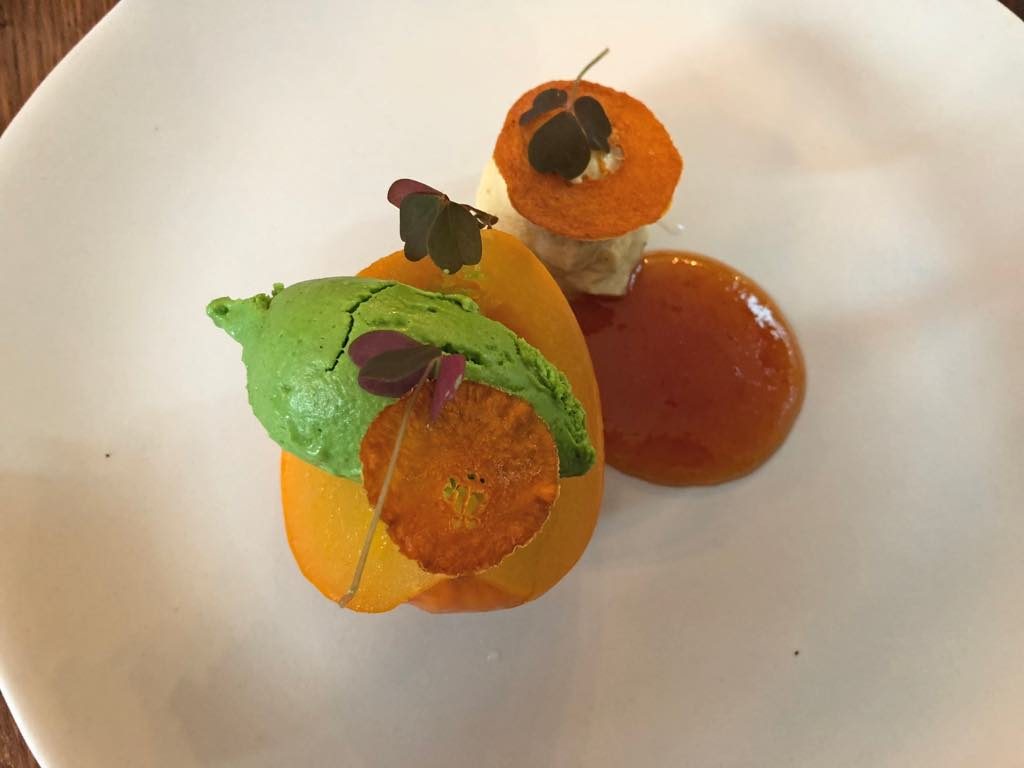 The desserts reached for the kind of creativity seen in the first courses. The fine chocolate-covered rice concoction (“almost like an ice cream bar,” said my friend) came with excellent coffee ice cream and candied clementine peel. The other dessert tried too hard for originality and fell far short, even though it looked beautiful on the plate. A tiny pumpkin served with grapefruit, kiwis and watercress ice cream, it confirmed my strong belief that vegetables don’t belong in desserts.

I left Brute with a positive opinion of the place, assisted a great deal by the warm welcome we received, even though the young tattooed chef’s attempts to be daring and creative didn’t always work out. I hope he will keep taking chances but that his results will become more appealing to diners. In any case, I’m glad he doesn’t resort to such gimmicks as making customers take their clothes off.