In our new Covid-19-infested world, at a time when people are still nervous about gathering indoors with strangers, a terrace is pretty much a necessity if you want to eat out in Paris. Since the newly re-elected Mayor Anne Hidalgo has allowed restaurants to extend their terraces to help them recover from the loss of business during lockdown, finding a terrace with a free table is not nearly as trying an experience as it used to be. The only problem is that sometimes you end up sitting in the gutter (many of the new terraces have taken over parking spaces on the street) or in other unlikely places.

So, when my friend James suggested that we have a birthday dinner for mutual pal Liz at the restaurant of the trendy hotel Edgar, I jumped on the idea. I had eaten there seven years ago when the hotel/restaurant first opened, and it was time to go back and try it again, but the main advantage was that it has a wonderful triangular terrace surrounded by trees on a quiet street. Added bonus: I had loved the food the first time.

Things have changed. The terrace is the same, but the small plates on the menu have been replaced by traditional starters and main courses, with a heavy emphasis on fish – only one meat course was available. We tried three of the starters. I ended up taking Carolyn’s fish rillettes because they came with beets (unannounced on the menu), which she can’t stand, so we switched. The dish was generous and tasty, although there were indeed a few too many beets in relation to rillettes.

James lucked out with the razor clams, a great big dish of them (many restaurants give you only four or five). They were tender and succulent, and the juices were well worth sopping up with the bread.

The other starter we tried was burrata with toasted buckwheat and poutargue (cured fish roe). I found this rather bland – more poutargue might have helped – and we had to ask for olive oil to add interest. 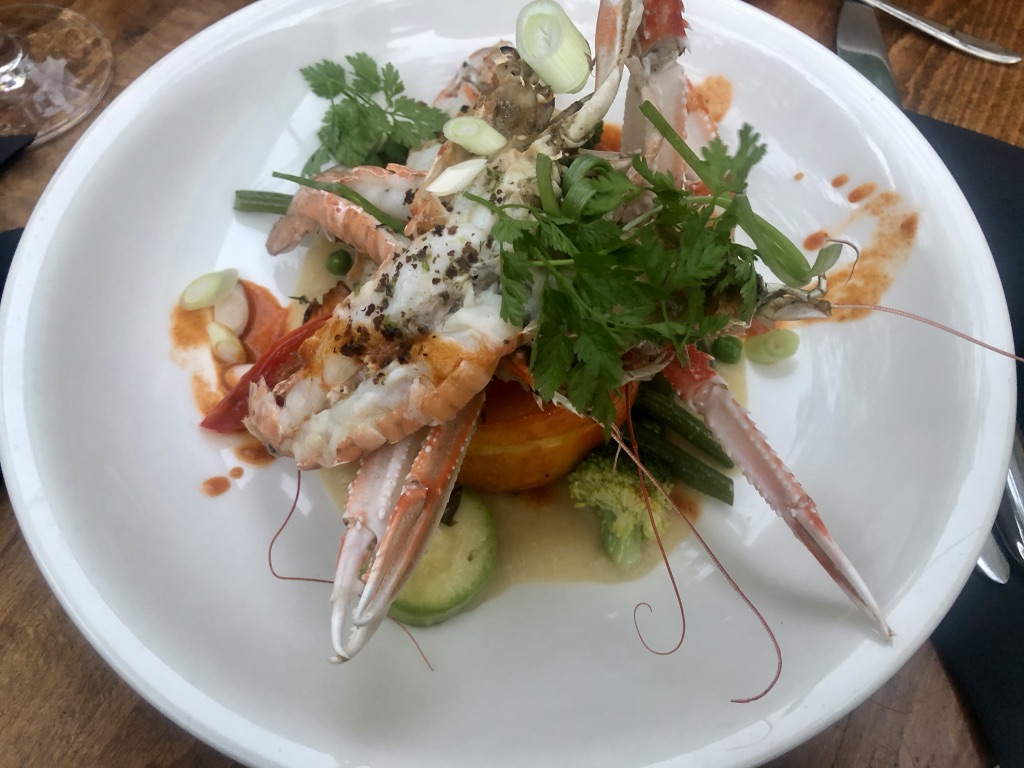 The main courses were more problematic. James and I had the langoustines, which he translates as Tipperary prawns rather than Dublin Bay prawns. I hate to say this, but they were frankly terrible. They smelled bad when the waiter set them down, there was hardly any flesh on them, and what there was was mushy and flavorless. I imagine they had been frozen for a long time.

Carolyn ordered the sirloin steak with fries. Although she had asked for it rare, it came cooked well past medium, and she lost interest halfway through. I liked the fries, however, which were crispy and non-greasy.

The only main course that pleased was Liz’s salmon tataki, which, unlike the steak, was lightly cooked, the way she likes it.

All three main courses came with the same combination of vegetables: peas, snow peas, zucchini, green beans and broccoli. That would have been fine, except that they were glued together with apple purée, whose sweetness was disturbing and out of place.

To prolong the party on the terrace, we ordered dessert, even though we weren’t feeling very positive about the food.  The cheese was pretty good: a nice Comté, an unidentified marbled cheese and a Corsican tomme, accompanied by fruit and nuts.

The chocolate dessert with bananas was also tasty, although rather goopy.

Our waiter, who had been trying to hurry us along throughout the meal and was not especially pleasant (although he was efficient) actually became nicer after I told him how disappointed we were with the langoustines. When the bill came, he had deducted the cheese and dessert; I would rather he had deducted the overpriced prawns – €28 for each dish – instead.

It seems to be almost a rule in Paris that restaurants with great terraces do not have great food. If only that would change!

Click here for suggestions for other good restaurant terraces and here for a review of a recently discovered one.

Open daily for breakfast and lunch, Monday-Saturday for dinner, Saturday and Sunday for brunch.
À la carte: around €47.