Back to the Source

Full disclosure: I went to the restaurant Grive with a friend who happens to be the mother of the chef. You will just have to take my word for it that this is an impartial review. I was worried about what I would do if I didn’t like the food, but luckily that didn’t turn out to be the case.

An important fact to know about Grive is that it uses exceptional products, direct from the producer, in all its dishes. One of the three owners, Raphaël Devic, who was already a supplier to other bistronomic restaurants like Chateaubriand and Jean-François Piège’s eateries, decided he might as well open his own restaurant and partnered up with Marius, who handles the wine selection and helps out in the kitchen, and Laurent, who takes care of the front of house. The latter two were both present and both delightful on the evening I ate there.

Raphaël goes to Normandy twice a week to buy Bayeux pork from the last farmer who raises the breed and to score fresh, sustainably fished seafood straight from the sea. He is also an expert in foraging for edible plants, many of which appear on the dishes served on pretty mismatched vintage plates at Grive. The restaurant’s delicious crusty dark bread comes from the nearby Ten Belles Bread.

The gorgeous heirloom tomatoes, the best I have tasted this year, were paired with purple basil and mild onions in one of the starters.

I had an old-fashioned (but now trendy) starter, egg mayonnaise. Here it was served with jambon de Paris, but not that horrible stuff sold in supermarkets; this is Prince de Paris salt-cured ham, one of the few made the traditional way. Fantastic!

The other starter we tried was cockles with wild sorrel, another triumph of simple goodness. 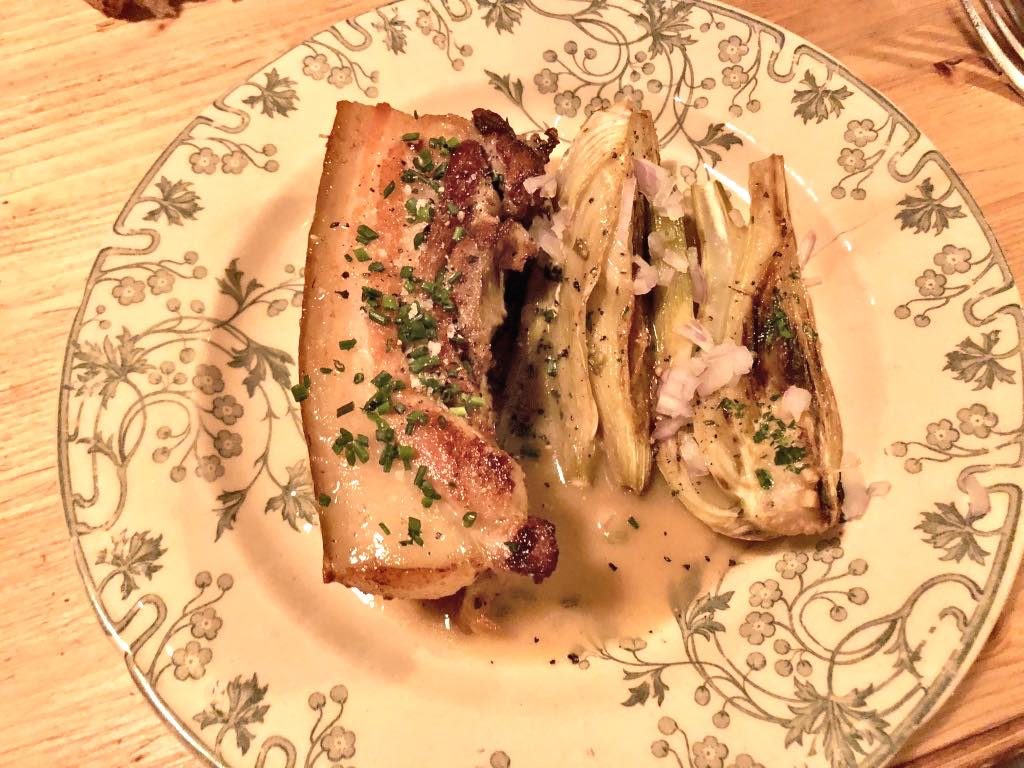 For my main course, I had the earthly, flavorful pork from Bayeux mentioned above, served with sautéed fennel.

My friends both had the line-caught pollock, properly cooked and nicely complemented by zucchini and fresh dill.

We finished up with a quince tart with hazelnuts and a super-chocolatey mousse with a touch of coarse salt, both superb.

“Grive,” by the way, means “thrush” (as in the bird), and while they weren’t on the menu (it is illegal to sell them to restaurants), a pretty silhouette of the bird adorns the wine glasses and serves as the restaurant’s logo.

As for the young chef, Paul Gray, he carries off an Elvis look with aplomb and acquits himself brilliantly in the kitchen. He’s made his mama proud.

Open Monday-Friday for lunch and dinner.
À la carte: around €40.