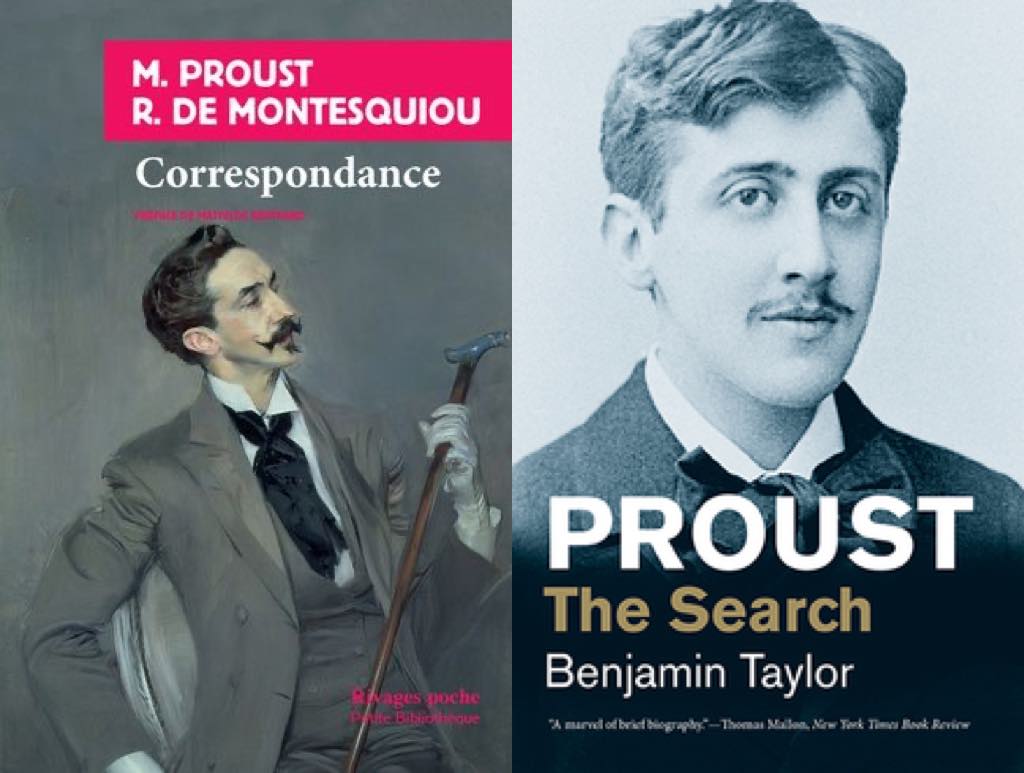 Note to readers: You may choose to read this commentary on the work of Proust here or listen to it on the audio file at the end of the article.

Ever since I started these lockdown literary excursions last March, the one work I have wished above all to discuss is Marcel Proust’s monumental À la Recherche du Temps Perdu (In Search of Lost Time). However, each week, as I contemplated writing about it, its sheer length, breadth and general extraordinariness made it seem more and more impossible to summarize adequately in a few hundred words. So during the summer, I started dipping into various books relating to Proust instead, and I hope that a few words about these texts will encourage you to read some of them or to approach the great work itself.

The books I have been reading include Proust’s correspondence with close friends, lovers and neighbors, and some short biographical studies.

Perhaps the most fascinating aspect of Proust’s letters is not so much the wonderful glimpses into the creation of his literary work – and there are many of those – but rather the ease with which the pettiness and ordinariness of daily life coexist with the sublime. Nowhere is that more apparent than in the correspondence between Proust and Robert de Montesquiou, who is widely considered to be the primary inspiration for the character Baron de Charlus.

The letters between the two reveal a friendship that involved constant fallings-out over imagined slights, not least the fact that Proust’s fragile health led him to repeatedly cancel plans to visit Montesquiou at his home in Versailles. But they show also how well-read both men were; their letters are peppered with quotations not only from each other’s works but also from a wide range of literature.

The trajectory of their friendship is particularly touching to follow. The earliest letters show the young, unpublished Proust showering praise upon Montesquiou for the latter’s books, now all but forgotten by posterity. As Proust began to publish his works, we see Montesquiou’s occasional bitterness as the younger writer’s renown eclipsed his own literary ambitions. Yet Montesquiou is generous in his acknowledgment of the greatness of Proust’s project. In one extraordinary letter, he praises Proust for “expanding the field of literature” by “opening up the immense space of inversion,” thereby recognizing the originality and groundbreaking nature of Proust’s treatment of the theme of homosexuality, which he saw as leading to “works that are both dangerous and beautiful.”

On the topic of sexuality, two books relating to two objects of Proust’s affection are well worth reading. The first, by Lorenza Foschini, traces the friendship and love of Proust for the composer Reynaldo Hahn. When the passion between the two men waned, an enduring friendship persisted, and Foschini’s description of Hahn visiting his dying friend is particularly moving. By quoting at length from their correspondence, not least the passages where Proust articulates the acute jealousy he felt, she shows convincingly how these letters formed the foundation for the lengthy musings on (heterosexual) jealousy found in À la Recherche.

An edition of previously unpublished letters from Proust to Lucien Daudet (son of writer Alphonse), appeared in 1991, edited by Michel Bonduelle, a medical doctor who had looked after Daudet during his final illness in 1946. Some of the letters are simply brief notes arranging meetings at the homes of various society hostesses that both men frequented. What is very clear is that Proust himself shared much of the same Parisian high-society snobbery that he satirizes with such devastating wit in his literary writing.

An even more recent edition of previously unpublished letters, Marcel Proust, Lettres à Sa Voisine, features those sent by Proust to a certain Marie Williams, the wife of an American dentist, Charles D. Williams, whose practice was situated above Proust’s apartment at 102, boulevard Haussmann in Paris. Many of the letters consist of the notoriously sensitive Proust complaining about the noise from above, but they also reveal a warm friendship with and intellectual respect for Williams, who herself was an avid reader of Proust’s work

Finally, if you are looking for a short and readable biography of Proust, you could do a lot worse than Proust: The Search, by Benjamin Taylor, which tracks the French writer’s transformation from literary lightweight to major author and considers the influence of things like the Jewish faith of Proust’s mother and events such as the Dreyfus Affair on Proust’s writing.