Au Bascou is something of an institution on Paris’s Basque restaurant scene. Over the years, it has changed hands a few times, and now a new chef/owner has taken over, brightened the place up with a fresh coat of paint and added some highly intriguing dishes to the menu.

I was dining with Francophile American friends who know their way around a poêle, so I thought they might be tempted by a special dish on the menu, priced at €51 for a full portion and €26 for a half when shared by two diners.

“You may never see this on a menu again,” I warned, and, as I had hoped, one of them, Dennis, took the bait.

What was it? Lièvre à la royale, an immensely complicated dish to make. The waiter gave us an abbreviated version of the process: the meat is scraped off a hare and mixed with spices and foie gras. The mixture is then wrapped up like a package in the skin and marinated in red wine and spices for 24 hours. It then simmers for 48 hours and rests for another 24 hours.

On the plate, it didn’t look like much, just a disk of meat sitting in a pool of a chocolatey-brown sauce. In fact, Dennis detected a chocolatey flavor, and the waiter confirmed that that was one of the ingredients in the sauce. We think the slightly sweetish taste came from another ingredient: cinnamon.

The flavors in this dish are so dark, complex and unusual that they lingered in my mind for as long as it took to prepare the dish. I had only tasted it once before, at the Grand Véfour many years ago, and was thrilled to find it on a menu again. Given its richness, a half-portion is more than enough, and it’s a bargain at the price. 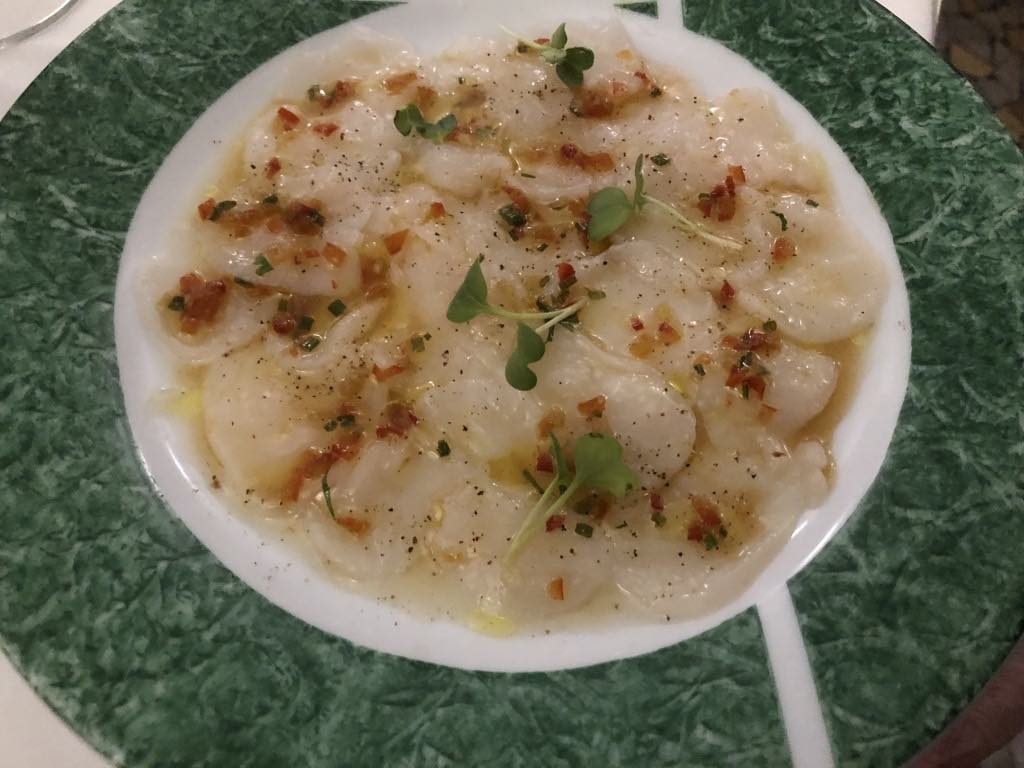 The lièvre was the star dish, but everything else we tasted was excellent. Our starters were pimientos del piquillos stuffed with morue (cod), which reminded Dennis of a similar dish his Italian-American mother used to make; a pleasing dish of scallop carpaccio with a Thai-inspired sauce; and a spectacular terrine of game meats in which each of the individual full-flavored ingredients was separate and tasteable.

The third person in our party, Debra, had roasted cod with lobster cream sauce, celery and spinach. While she enjoyed it, I think she might have been a bit jealous of the hare dish.

Desserts were a perfect millefeuille, with real-vanilla-flavored cream and crispy puff pastry, and a tasty dish of vanilla and chocolate cream topped with thin plaques of chocolate and flavored with saffron.

The lièvre à la royale was not the only unusual item on the chalkboard menu; another was oreiller de la belle Aurore. First concocted in the early 19th century, it is known as the Holy Grail of charcuterie. Named in honor of the mother of its inventor, Brillat-Savarin, this pâté en croûte contains some 15 types of meat, including 10 stuffed game meats (quail, pigeon, wood pigeon, partridge, grouse, mulard and mallard duck, pheasant, hare, wild rabbit, venison, etc.), foie gras, Bresse chicken, black truffles from Tricastin and pistachios.

Reynon Traiteur in Lyon is famous for producing 15 of these gigantic “pillows” in the week leading up to New Year’s Eve every year. When sliced, a bit of each of the ingredients is supposed to be visible (a bit like the terrine mentioned above, which bodes well for Bascou’s version of the pillow).

At Bascou, the oreiller de la belle Aurore is priced at €140 for two people and must be ordered in advance.

Now there’s another dish you won’t often see on a Parisian menu. Anyone game?