If you’re fishing for a seafood restaurant that won’t leave you high and dry with an empty wallet, the Bar à Iode in Paris’s fifth arrondissement is the place to go. Not only does this restaurant on the Boulevard Saint Germain make a concerted effort to keep its prices low, but it also sells bottles of wine with no corkage fee, a real boon.

The restaurant has a cheery, colorful marine-themed interior and a rather large sidewalk terrace (with, unfortunately, the traffic of the boulevard rushing by).

The servers are also cheery, and the menu offers an appealing variety of choices, including dishes to share, small plates and full-size main courses.

We started with espadon (swordfish) ceviche with coconut milk, which sounded interesting but didn’t really work, since the creamy coconut milk kills the acidity of the ceviche and conceals the flavor of the fish.

The other starter, cockles à la marinière, was more satisfying. They were hot and simply prepared with olive oil, garlic and white wine broth. A little more of the broth would have been appreciated, but overall we were satisfied.

One way the Bar à l’Iode keeps its prices low is by not providing fancy service. You might not think that €25 is a low price for a main course, but it is for sole meunière, which cost €44 at Garnier. At the latter, however, the waiter took it away and boned it after showing it to me. Here, I was left to do the work myself, and this is not a job I am skilled at. Luckily, my friend Susan was there and managed to expertly bone that slippery fish, which was very tasty, but not as perfect as the one at Garnier. The mixed vegetables, with lots of sprouts, were just dull. 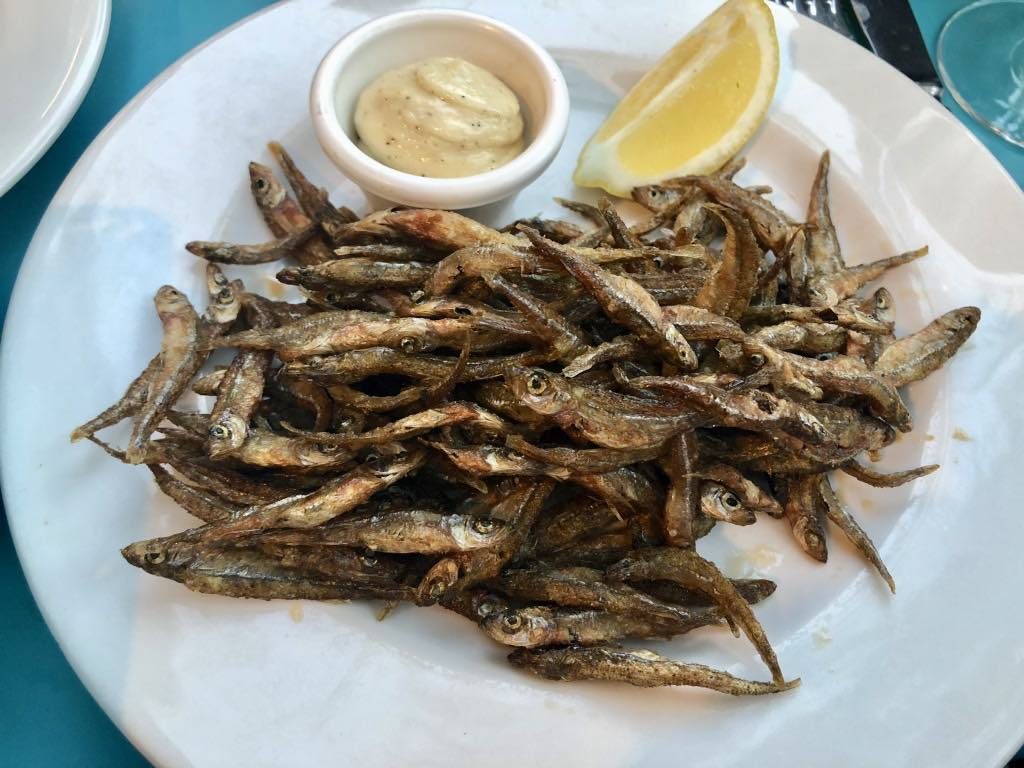 Luckily, it was a very large piece of sole, big enough to share with Susan, since the other main course we had ordered, fried eperlan (smelt), was basically inedible. The little fishes had been deep-fried to the point where they were just dry husks, with no hint of flesh inside and no flavor. A real waste.

When we pointed this out to the waitress, she argued that most people prefer them that way, and that until they had started cooking them longer, people complained that they were greasy. This was not a good defense, in my opinion, since properly deep-fried food should not be greasy at all. Cooking them longer is no solution.

For dessert, we shared a pain perdu (French toast) with salted-caramel ice cream (is there any other kind these days?). It was very good and not tarted up with too much extra sweet stuff, as it is in some restaurants.

I was surprised that the waitress did not deduct the eperlans from the bill, since we had hardly touched them, but they only cost eight euros and the whole bill for dinner for two people, including a nice bottle of white wine (Sainte Cécile des Vignes Révélation for only €12!), came to a modest €68.

Those little fish were a definite demerit, but I would still go back to Bar à Iode and just be a bit pickier about what I order. My intuition is to stick to the classics here to avoid fishing for trouble.

Note: There is a second Bar à Iode at 18, rue Jean Macé in the 11th arrondissement; Métro: Charonne.