With The Courtauld Gallery in London closed for renovation, some of its treasures have been shipped back to where they came from: France, where they are being shown at the Fondation Louis Vuitton in the exhibition “The Courtauld Collection: A Vision of Impressionism.”

British textile manufacturer and philanthropist Samuel Courtauld (1876-1947) was that rarest of creatures: a wealthy businessman with socialist ideas, who later in life campaigned for limiting private profits, nationalizing some industries, worker-owned enterprises, regulation of financial markets and so on. 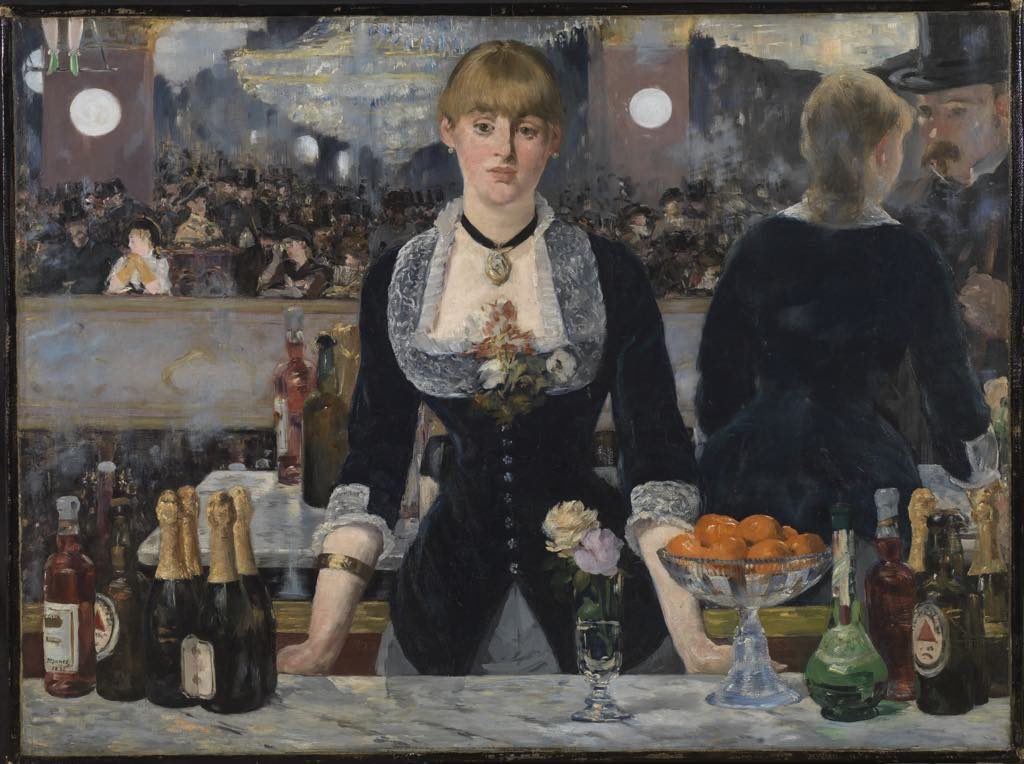 Among the 110 works on show are some true gems. Right away we have Édouard Manet’s “A Bar in the Folies Bergères” (1882). The barmaid stands squarely in the center of the painting, leaning on the bar and staring listlessly out of the canvas. She seems to be placed in front of a mirror in which the action in the bar is reflected, but when you take a closer look, this makes no sense.

The people seen behind her are actually the spectators in the theater’s balcony (one woman is looking at the stage through opera glasses) even though it is impossible. And then, to confuse matters further, there is the reflection of a man in a top hat off to the side talking to the barmaid, another impossibility. The lace on the barmaid’s dress and the objects on the bar – a glass bowl of oranges, two roses in a vase, bottles of champagne and other spirits – are painted in loving detail.

Manet was taking artistic license to an extreme here, as he also did in his famous “Le Déjeuner sur l’Herbe” (c. 1863), an early version of which hangs nearby. There was no nude woman at the picnic he painted later in his studio.

Many other works stood out for me in this exhibition: Claude Monet’s “Antibes” (1888), of a lonely pine against a backdrop of the sea and distant mountains; Pierre-Auguste Renoir’s luminous landscape with a single figure wading through the tall grasses in a field in “Spring, Chatou” (c. 1873); George’s Seurat’s tranquil landscape “The Channel at Gravelines, Grand Fort-Philippe” (1890); and Paul Cézanne’s gorgeous green and blue “Le Lac d’Annecy” (1896).

Vincent van Gogh’s bright and joyous “A Wheat Field, with Cypresses” (1889; pictured at the top of this page), with its wildly swirling clouds, is displayed right next to his sad “Self-Portrait with Bandaged Ear), made in Arles after he cut his own ear following a violent quarrel with Paul Gauguin. Van Gogh depicts himself in workman’s clothes with pursed lips and staring crystal-blue eyes. Behind him are a Japanese print on the wall and one of his own unfinished paintings on an easel.

Near the end of this exhibition heavy in masterpieces is a special treat by one of the few non-French artists shown: 10 watercolors of landscapes by William Turner, dating from different periods of his career, some of them finished works and others impressionistic sketches. My favorite has to be the moody “Dawn after the Wreck” (1841), in which a lone dog stands on a beach howling at the moon, whose waning light is reflected on the sand.

As collectors go, Courtauld obviously had the means and the eye to choose the best. If you live in Paris, you only have to travel to the Bois de Boulogne to see some of his most brilliant choices. And it’s nice to know that in a couple of years’ time, a hop across the Channel will enable you to see them again when the remodeled Courtauld Gallery in Somerset House reopens.