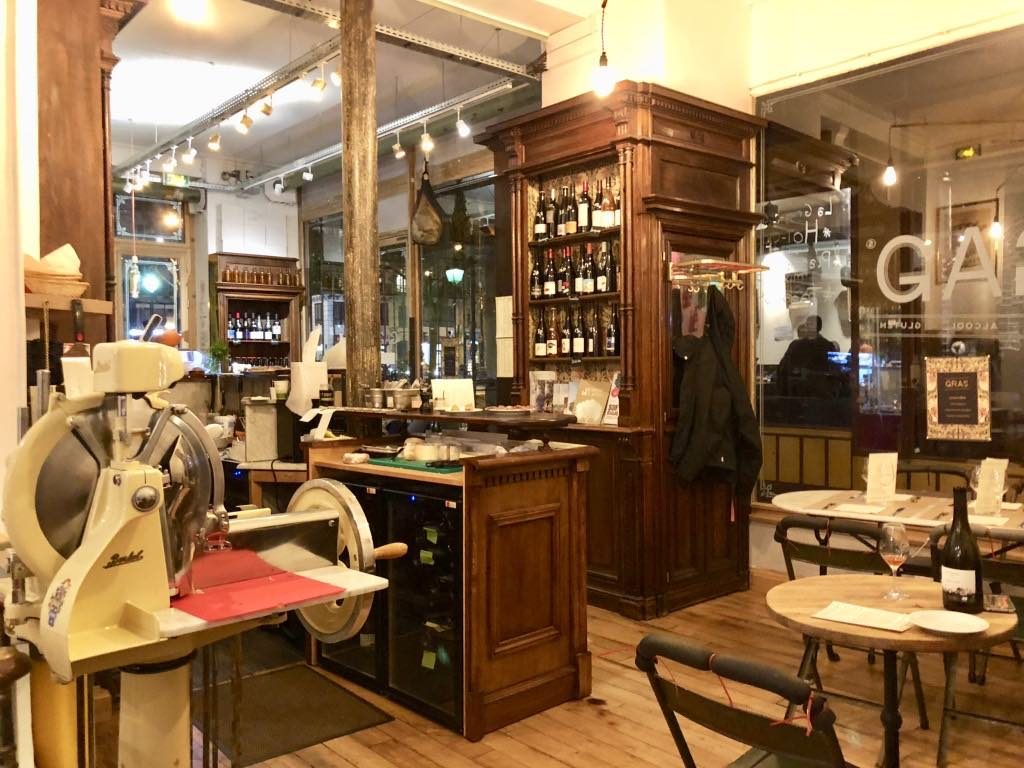 First, a word about the unfortunate name of the new restaurant GAG. The French know, and use all the time, the English word “gag” to mean “joke.” But apparently they don’t know its other meaning: “to choke or to retch.”In this case, it is also an acronym and manifesto for “gras“ (fat), “alcool” (alcohol) and “gluten.” Get it? It’s a concept. And you may also take it as a warning: all you gluten-free, low-carb, low-fat, water-drinking types should stay away. (And they did. On the night we were there, it was almost empty, although, to be fair, it was a freezing, snowy Wednesday night.)

That doesn’t mean, however, that the restaurant is not concerned about health. Au contraire. Our friendly waiter, also the manager, was something of a crusader, explaining at great length how the bread is made from heirloom varieties of wheat, what gluten is (he lost me on this one) and why all the restaurant’s wine is natural.

Natural wine is certainly a good thing, as long as it is well-made. We had a bottle called Les Feignants (meaning “the lazy ones”; cute wine names are the flavor of the day, especially for natural wines), a Languedoc “vin de France,” as table wines are now called, from Opi d’Aquí (which itself means “Opium from here” in Occitan!). We enjoyed it, but it was more grape juicy than winey and rather pricey at €40 the bottle.

When we asked the waiter for water, he told us he didn’t approve, but brought it to us with no further complaint. I have been in Paris restaurants where the waiters refused outright to serve water because meals should be accompanied by wine.

The first courses were the highlight of the meal: a plate of charcuterie consisting of a fine chorizo, a wonderful spicy andouille (with none of the gristliness and gaminess that turns many people off to this sausage) and thinly sliced boudin noir.

The other starter was a strange mixture of unrelated ingredients that didn’t really speak to each other, but each of which was excellent on its own. A soft-boiled egg, at the heart of the dish, was perfectly cooked and truly delicious. It was topped with a miso sauce made with smoked tea. The waiter proudly informed us that the sauce was egg-free, which seems rather pointless when it’s served on top of an egg. Underneath the egg was an excellent mackerel brandade.

The main courses were highly unusual for a Paris restaurant, more like something you’d be served  In a farmhouse kitchen. One was a tasty cabbage soup with lentils and very salty bacon-like Kintoa pork ventrèche.

The other main was pain retrouvé, a play on the French name for what we call French toast: pain perdu. It consisted of thick hunks of bread soaked in lentil mousseline and topped with slices of lamb from the Aveyron (customers can also choose vegetables or the aforementioned ventrèche). It was nicely flavored but was kind of gooey and not what I would call refined.

After a nice plate of cheeses, we had an apple and almond clafoutis with frangipane, which I found unpleasantly chewy and barely warmed, but there was something beguiling about the flavors, and it paired beautifully with that natural wine.

Everything here was well sourced, mostly from southwestern France, and individual items were delicious, but I would say that on the whole, the menu is less interesting than it should be, especially since one of the men  behind the three-month-old restaurant is Arnaud Daguin, a Michelin-starred chef.

The interior, by the way, is also an odd mixture, with the main section of the restaurant retaining the handsome dark-wood decor of the space’s former life as a shop, with a corner in the back incongruously furnished with 1950s pieces, complete with a kidney-shaped coffee table.

Going to GAG was a fun and unusual experience, but while I certainly didn’t have the classic Valley Girl reaction – “Gag me with a spoon!” – I didn’t enjoy the food enough to go back again.