They’re young, they’re trendy, and they love their “shareable“ small plates or “tapas.” It seems like every new restaurant in Paris these days offers nothing but. I am a great fan of small plates, but I take issue with the term “shareable“ when served a plate with one, yes one, razor clam on it. Granted, it was deliciously dolled up with rhubarb, cucumber and an Asian-inspired sauce, but it’s not easy to share a single razor clam.

It was served to us in the popular restaurant Le Grand Bain in the 20th arrondissement, but I have had similar experiences in many other restaurants of this type, where, for example, four people are served a plate of three oysters. You have to be a genius at math and have highly advanced cutting skills to deal with that. Or one person has to be a martyr and give up their share.

Le Grand Bain – pretty much decor-free, in an industrial setting – is located on Rue Denoyez, a short, graffiti-covered street off Rue du Faubourg du Temple in Belleville. On the night we went, it was heaving with young people and echoing to the sounds of flamenco music from the real Spanish tapas bar across the way.

Although there is a terrace, we ended up inside because of a rainstorm. The place was bustling with a young crowd, and while little attention was paid to social distancing, at least the whole front of the restaurant was open to the fresh air (what will happen when the cold weather arrives is another question). The service was friendly and prompt, and everything we had was tasty and original.

After the single clam, we had a much more generous serving of fried monkfish liver with Borlotti beans and beet greens. I thought it was fantastic, with its very mild, delicate flavor, but my friend, who has never had it before, didn’t really take to it. More for me.

One of the very best dishes was the amazing barbecued broccoli and kale with nutritional yeast. 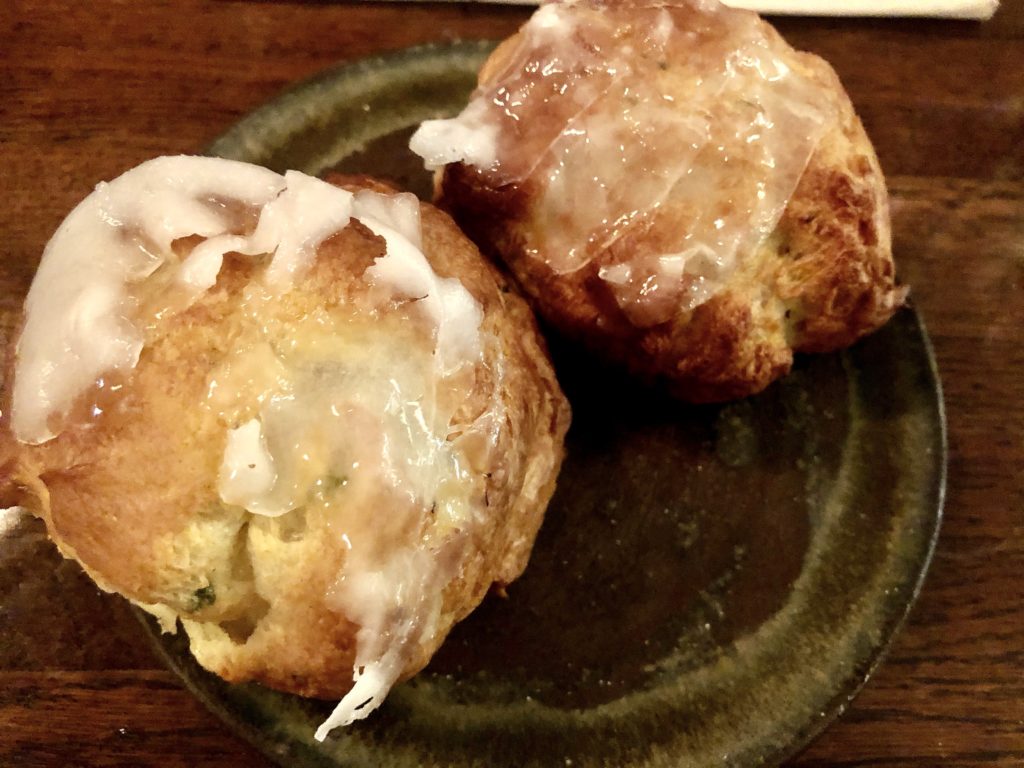 It had strong competition, however, from the gougères, delectable popovers with gruyère cheese. These were glazed with lardo di Colonnata, which might have been a case of gilding the gougère but wasn’t. It worked marvelously. 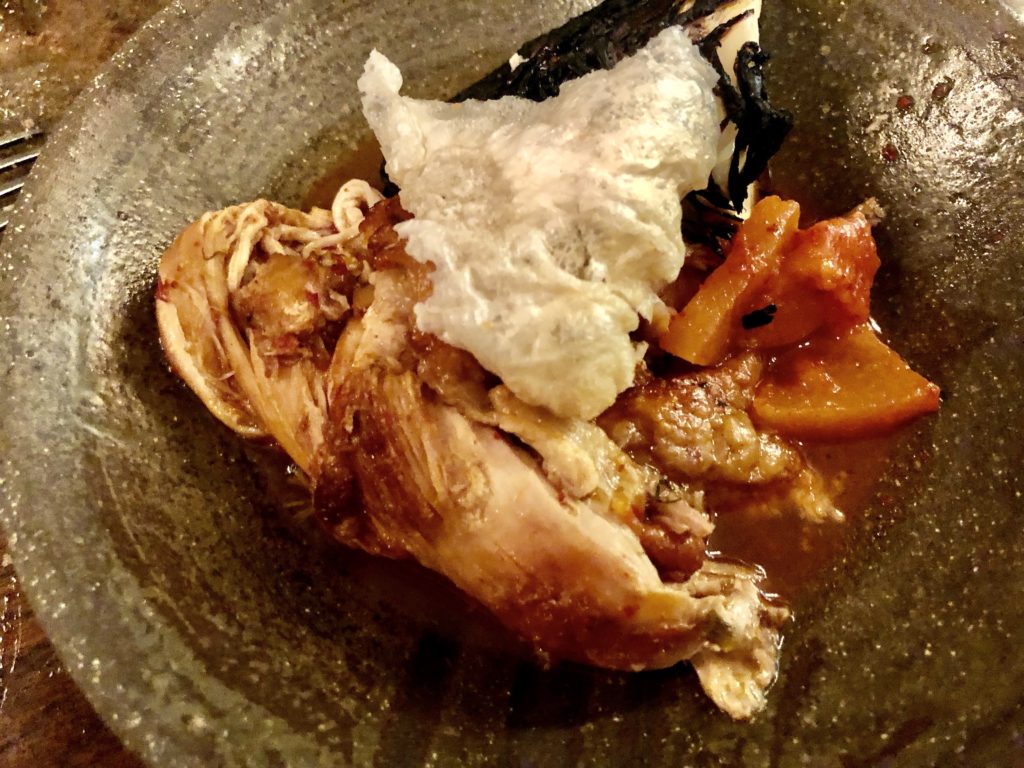 Our only meaty dish was succulent pork, slow-cooked in cider and served with melon kimchee and barbecued pointed cabbage. 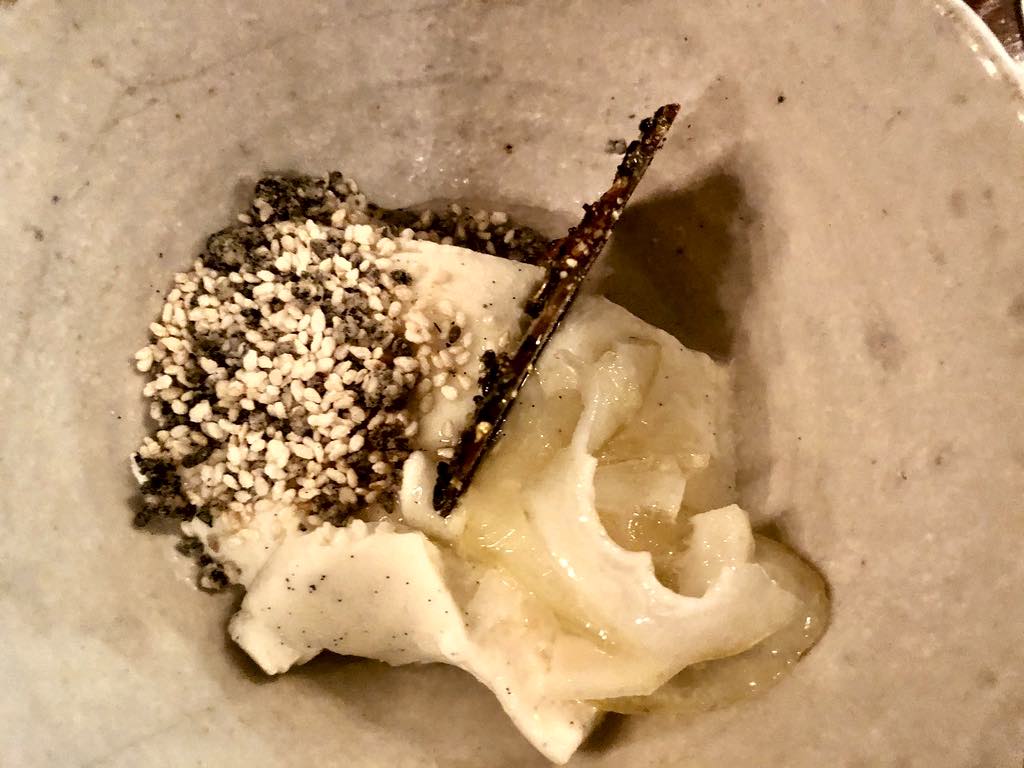 The one dessert we tried was pannacotta, like all of the dishes here judiciously embellished, in this case with a sesame crust and black-sesame-seed cracker.

Behind these fine dishes is a British chef, Edward Delling Williams, formerly of Au Passage. All the wines are natural, but I would recommend trying a glass or asking for a taste before ordering a whole bottle to be sure you like it as not all natural wines are created equal.

You won’t have to worry about taking a bath on the bill at Le Grand Bain: for a total of six dishes (a perfectly satisfying amount, along with the good bread from the restaurant’s own bakery, Le Petit Grain, down the street) and five glasses of wine, we paid only €92.

Open daily for dinner only.
À la carte: around €35