I have been to the restaurant Variations in Paris’s 11th arrondissement twice now, both times because a friend happened to walk past it, liked the look of the place and its menu, and suggested that we go.

The restaurant’s handsome designer decor does make a great impression. The walls are painted in shades of blue or covered with geometric patterns and a tropical-themed mural with palm trees and exotic birds. The plush banquettes and chairs are in contrasting shades of blue and yellow. Each time I went to Variations for lunch, however, I left less than satisfied, but for very different reasons.

The first time, my two friends and I found the restaurant empty except for one other table. When it came time to take our order, an older woman, who appeared to be the  Maître d’ or perhaps the owner, came over to where we sat next to the small bar. A young waitress was standing behind the bar, and every time we ordered something, the older woman repeated it to the younger woman, who was only about a foot away and had certainly heard every word we said. Bizarre.

Then we were seriously underwhelmed by the food, from which we had expected great things. The gravlax starter was not real gravlax (cured in salt, sugar, and dill) at all, just salmon.

The “Japanese-style” marinated steak I had for my main course was thin, overcooked and not particularly tasty. A true disappointment.

Both of these items were ordered on the fixed-price lunch menu, which is a good deal at €23. The one point of excellence was the vegetables accompanying each dish, which were flavorful and really delicious.

The other saving grace was the desserts, a wonderful chocolate concoction with pear and cardamom and an île flottante.

The second time I went, with a different friend, the situation was completely different. The restaurant was full, and the older woman was on her own. I found her rather rude at first – when I arrived, the restaurant was still nearly empty. I asked if we could change tables because my friend was cold sitting in the draft from the door. She agreed, but retorted huffily: “Well, she asked to sit there!” lest we forget that in Paris the customer is all not always right and always deserves some blame.

Once again, I ordered from the fixed-price lunch menu, but my companion chose from the much more expensive à la carte menu.

And, once again, I was underwhelmed by the food. My œuf meurette, a dish I love, with its rich, winey sauce (like the sauce on bœuf bourguignon), had a thin, watery, sour sauce and was actually unpleasant.

My pot-au-feu was better, but again mainly because of the excellent vegetables.

My friend, on the other hand, was relishing her meal, which started with cockles topped by a saffron-flavored gelée dotted with rouille, the spicy sauce that is usually served with bouillabaisse, and spritzed with sea-water foam. 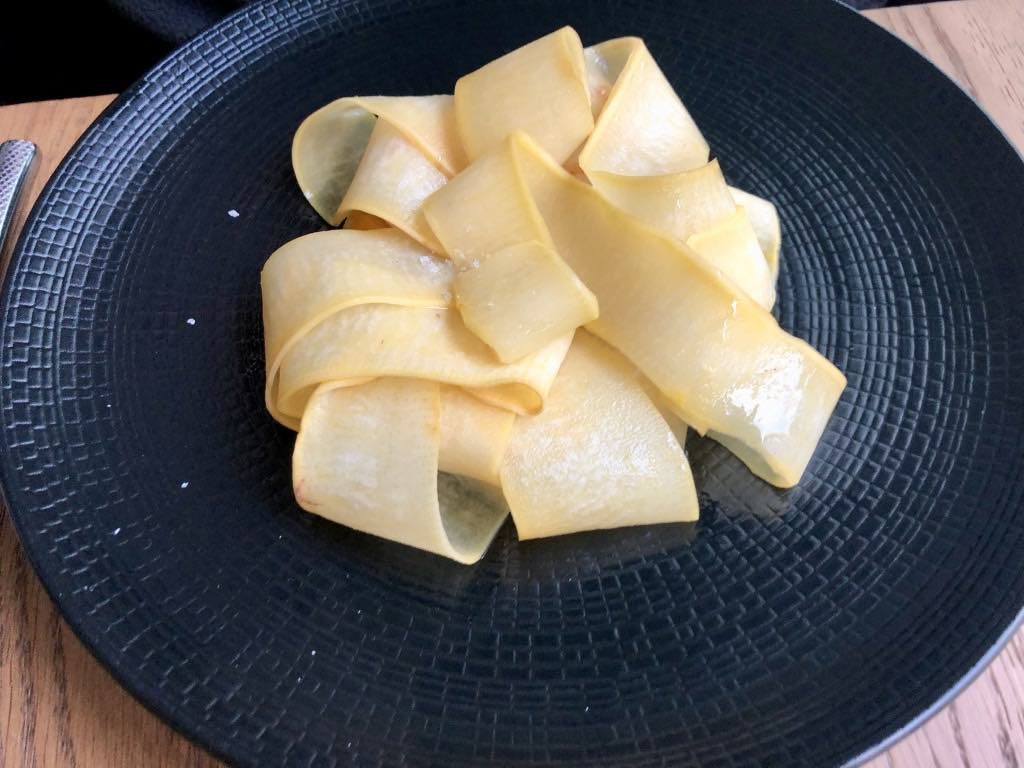 She followed that with a dish of scallops hidden under ribbons of golden turnips and served with horseradish, which she also appreciated.

We shared a layered “tiramisu-like” dessert, which was fine but didn’t send us to the stars.

Needless to say, with only one server taking care of the busy restaurant, we were often kept waiting too long. In her defense, the woman was run off her feet and did apologize to us for the waiting in a friendlier manner than she had exhibited when we arrived.

My conclusion from these two experiences was that the chef doesn’t go to much trouble for the lower-priced set menu, so if you go there, I advise you to order à la carte. It will cost you, though.

The restroom here, by the way, is one of the best I have seen in a Paris restaurant: accessible, spacious, clean and attractive, with real towels and Aesop products.