A Paris resident since the early 1980s, David Jaggard is a copywriter, translator, composer, humorist and food fiend. Unfortunately, only the first two activities pay for the fifth. Between meals, and installments of C'est Ironique, he serves as sub-editor of the satire site The Big Jewel (thebigjewel.com) and occasionally performs as a standup comic in Paris. 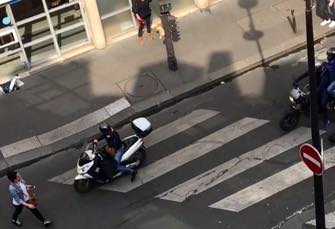 The French Mindset: Out of Sight, Out of Existence

Nothing to See Here, Folks

The first time I heard about the now-commonplace airport restrictions for carry-on liquids, I was already standing, beltless and shoeless, in front of a security agent at Orly. Nancy and I were flying to Spain for a short trip with … Read More

It was Samuel Johnson who said, in an essay on future U.S. presidents: “Patriotism is the last refuge of a scoundrel.” If he were alive today, he would probably say, “Uhdv fnn glsh szzz frrs fffffj oooh mrrst.” Because, hey, … Read More

Politics in France and the U.S. – Is Not (Entirely) What This Article’s About

What Do They Have in Common?

With the arrival of a new administration in the United States and a presidential election looming here in France, it’s difficult not to be thinking about politics. But somehow I manage. Lately I’ve been thinking instead about planned, or just … Read More

In the past few days, readers from all over the world, or my frontal lobe, have been writing in to ask, “David, have you seen anything strange in Paris recently?” To which I can only answer, “Should Adair buzz in … Read More

The Good Old Days in Paris — Or Were They?

It Depends on What the Definition of “Good” Is

My wife Nancy used to be close friends with an American woman who had lived in Paris in the late 1940s and early ’50s. One day they were talking about what the city was like back then, and the older … Read More

French Wine Tasting: How to Be (or Sound Like) a Wine Expert (or Snob)

For my most recent birthday, a friend gave me a bottle of a Pauillac grand cru classé from 1986. If you don’t have a friend like that, you should get one. It’s not the kind of wine that I drink … Read More

French Bashing Again: The Wolf Is at the Porte (de Clignancourt)!

Stroll for Your Lives

As though we didn’t have enough problems in Paris already, what with facing a cold snap, eyeing a presidential election in May and stomaching a surge in the rat population,  now we have wolves roaming the streets. Or at least … Read More

The Good, the Bad and the Incomprehensible

I hate to say it, but if Paris and Rome were pitted against each other in an all-out, go-for-the-jugular cultural history smackdown, Rome would win. It’s true that Paris has the Louvre,  the Musée d’Orsay, Notre Dame, 1.5 godzillion other … Read More

Christmas in France: The Spirit Gets Lost in Translation

No Country for Gold Diggers

Like all people of any nationality, the French are associated with a number of stereotypes based more on assumptions than facts. The natives of my adopted country are supposedly great lovers and terrible soldiers, well dressed and ill mannered, with … Read More

It’s a Matter of Perception...

Paris has long been a magnet for dreamers of all kinds: poets, painters, composers, philosophers, wisenheimers… Oh — and people who are intent on killing themselves in the dumbest but most mediagenic way possible. I was reminded of the last-named … Read More